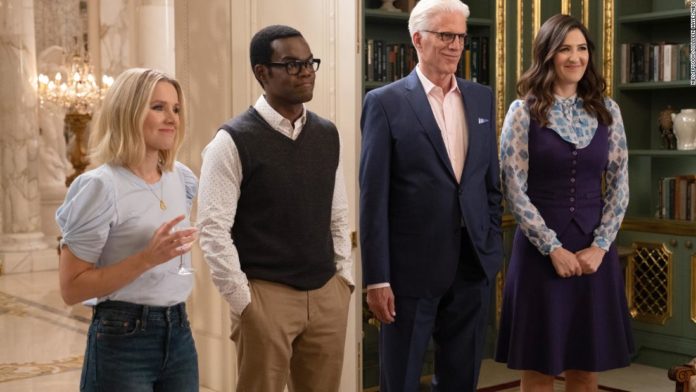 Sweet yet silly, and oddly profound, “The Good Place” finished its run on NBC with an extra-long episode that explored nothing less than what it means to be human.
Giving each of the characters an individual curtain call, the series saw them achieve a feeling of serenity and completion one by one, realizing that death — or in this case, walking through the door and dissolving into the universe — is a part of life, and that even a perpetual existence in “the good place” has its limits.
They came to that realization on their own terms, with Eleanor (Kristen Bell) temporarily convincing Chidi (William Jackson Harper) — the love of her afterlife — to stay with her a little longer. But then she let him go.
Not surprisingly, the most memorable scene in the episode, appropriately titled “Whenever You’re Ready,” belonged to Ted Danson, whose character, Michael, was granted the right to move to Earth and become mortal. Told that his future would be uncertain, he smiled and said, “I won’t exactly know what’s going to happen after I die. Nothing more human than that.” (A cameo by Danson’s wife, actress Mary Steenburgen, was an especially nice touch.)
In ways, the episode recalled “Six Feet Under,” a series that also found meaning in life through the subject of death. But happily, there were still plenty of laughs, like Michael citing a need for “more architects and actors,” or a reference to Shakespeare having walked through the door — just as well, Eleanor said, because his “last 4,000 plays” had been far worse than the ones he wrote when he was alive.
In a recent Time magazine column, writer Judy Berman suggested that the series — the only program on one of the major networks nominated for the best comedy Emmy last year — “may also turn out to be the last great show to air on a broadcast network.”
Frankly, that appraisal seems premature, and it’s worth noting “The Good Place” never qualified as a big commercial success, reflecting how life in TV has changed since the days of NBC’s dominant “Must-See TV” lineup.
The finale, however, couldn’t have been much better in bringing the show to a satisfying end, pondering the weighty issues that death — and what might come after it — have always presented with charm, humor and grace.
With that, as Eleanor might say, stick a fork in it. It’s done.