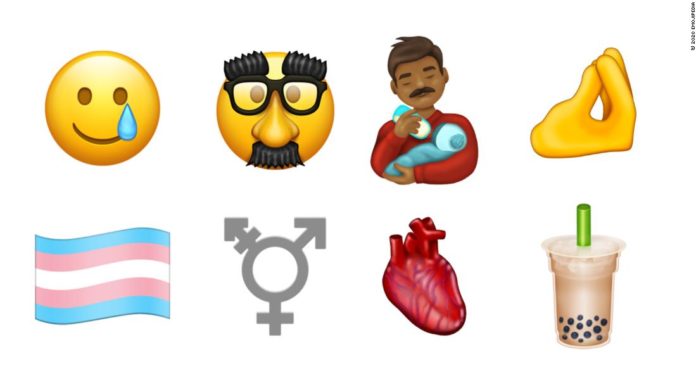 Written by Jacopo Prisco, CNN
The transgender flag, women wearing tuxedos, bottle-feeding parents and a gender-neutral Santa are part of of the new 2020 emoji update from the Unicode Consortium, a nonprofit organization that sets the standards for emoji compatibility and releases new symbols.

These new symbols will expand on the existing ones, which currently only include a man in a tuxedo and a woman wearing a wedding veil.

They were proposed by Google, which also proposed the entirely new bottle-feeding emoji.

Proposals for new emoji can be submitted by anyone, although corporations such as Google, Microsoft and Apple usually end up with the lion’s share of accepted submissions.

Italians will also be delighted by the addition of a hand with pinched fingers, titled “Italian Hand Gesture.”

Not to be confused with the “chef kiss,” this gesture is mostly used to express confusion, disbelief or outright rejection in response to a statement (“What are you talking about?!”), as well as a way to vigorously and slightly aggressively accompany direct follow-up questions (“Who?” “Where?” or “Why?”).

Meet the man who invented the emoji

Among other welcome new entries is a smiley face shedding a single tear, a face disguised with “Groucho glasses,” Ninjas, the dodo and the woolly mammoth (both extinct), a bubble tea and a heart — that’s a literal, anatomical one (lungs are also provided in a separate symbol).

The new set, which includes a total of 117 new pictograms, will be rolled out with the Emoji 13.0 release later this year.

It will then be up to manufacturers of smartphones and other devices to incorporate them via a software update, which is likely to happen in the fall.