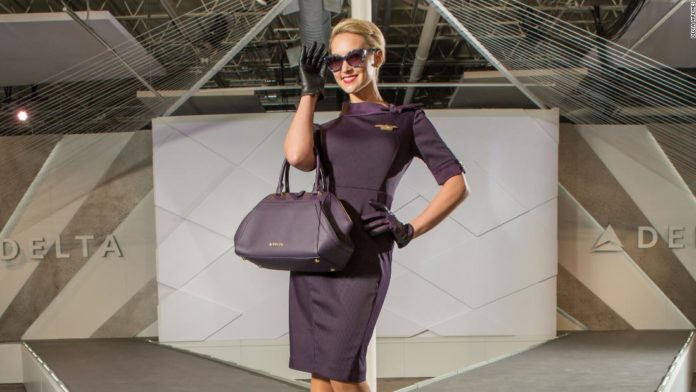 The uniforms, worn by Delta’s flight attendants, gate agents and other customer service employees in airports, are made by Lands End. The uniforms have been in use since May 2018, although some workers who complained about health problems were given permission to wear other, similar-looking clothing.
More than 500 employees, most of them flight attendants, filed a federal lawsuit against Lands End on Dec. 31 alleging health problems they believe were caused by the uniforms, including vocal cord dysfunction, breathing difficulties, skin blisters and rashes, blurred vision, nosebleeds, ringing ears, migraine headaches and fatigue.
Delta (DAL) said that it conducted testing and found the uniforms to be safe. But the lawsuit challenges the result of that study and said the employees’ own test found the presence of “chemicals and heavy metals far in excess of industry accepted safe levels for garments.”
So Delta said Wednesday that it is starting the process to change the uniforms.
“The uniform was certified to be safe. That said, there were people who were having reactions to them,” said Delta spokesman Anthony Black. “Both those things can be true, so we are going back to the drawing board.”
In an email Delta sent to employees the company wrote, “we have not been able to resolve this situation for everyone, which has been our top priority all along. That’s why we are announcing a completely new uniform program.”
The change will cost Delta millions of dollars, according to the airline. The new permanent uniforms should be in place “hopefully in late 2021,” according to the email. But new clothing will be available in May in the interim.
Delta will not change other uniforms also provided by Lands End worn by “below the wing” employees, such as mechanics, cargo handlers and ramp workers. The overwhelming majority of complaints about Lands End uniforms have come from the “over the wing” employees such as flight attendants, Black said.
Lands End (LE) refused to comment on the lawsuit. Thursday it issued a statement that did not directly address Delta’s decision to change some of its uniforms.
Lands End said only that its “garments meet or exceed the strictest global standards” and that “we value our partnership with Delta and are pleased to continue to work with them to supply safe, innovative uniforms that meet their program needs.”
Delta pilots, the only group of uniformed employees at the airline represented by a union, wear clothing from another supplier and have had no complaints about their uniforms.
In addition to the lawsuit, the airline also faces a union organizing campaign by the Association of Flight Attendants, which is seeking to represent the 25,000 flight attendants at the company.
The union held a conference call for interested employees on the issue of the uniforms on Tuesday evening. The email from Delta to employees was sent out on Wednesday.
Sara Nelson, the international president of the union, said she believes both the lawsuit and the organizing effort were keys to getting Delta to change its view on the uniforms.
“It’s a combination. The flight attendants were grasping at anything they could to get help. The individuals deserve a lot of credit for organizing and filing the lawsuit,” she said. “But it was within days of the union being on the property to organize that Delta announced that anyone who needs to get into alternative uniform can do so.”
The union narrowly lost an organizing vote among Delta flight attendants in 2010. Nelson said the company’s potential resolution of the uniform issue should not affect the union’s organizing drive.
“Our whole purpose is to get results,” she said. “What flight attendants are saying, ‘Look at what we got done in a short period of time with AFA.’ People want to go with the winning team.”
But the union has yet to file a request for a vote on representation, nor did it negotiate with Delta directly on behalf of the airline’s flight attendants. It did talk to the company about flight attendants it represents at Endeavor Air, a wholly-owned subsidiary of Delta that provides flights under the Delta Connection name.
This isn’t the first time employees of a US airline have complained about uniforms that could pose a health hazard. In 2017, American Airlines (AAL) parted ways with clothing manufacturer Twin Hill after complaints from the in-house union that represents its flight attendants. And AFA won changes in the uniforms at Alaska Air (ALK), Nelson said.