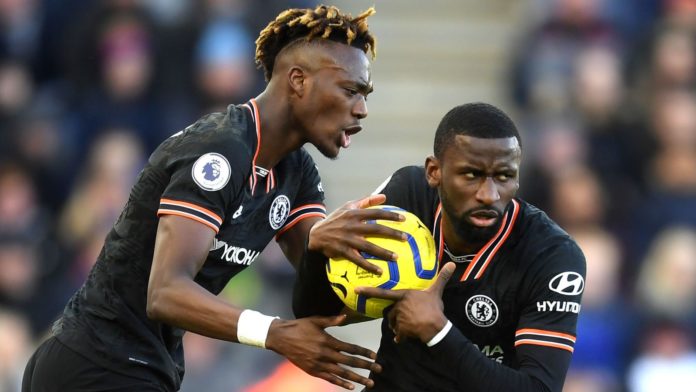 With both sides looking to boost their top-four hopes, Chelsea took the lead two minutes after half-time through Antonio Rudiger.

However, Leicester were behind for just eight minutes as Harvey Barnes’ deflected effort then brought them level before Ben Chilwell capitalised on an error from Willy Caballero, who was was picked ahead of Kepa Arrizabalaga.

The goals kept coming as Rudiger looped a header over Kasper Schmeichel to bring Chelsea level (71), but there was still time for Barnes to spurn a golden opportunity to give Leicester all three points, sending the ball wide of the far post with the goal at his mercy.

It ended all square after frantic second half as Leicester moved 15 points clear of fifth-placed Manchester United.

However, United, who are now seven points behind Chelsea, have the opportunity to cut the gap when they take on Wolves, live on Sky Sports from 5pm (kick-off 5.30pm).

How events unfolded at the King Power…

Leicester were on the back foot for much of the first half and they were clinging on to stay in the game as Chelsea dominated without much reward.

Man of the match: Antonio Rudiger

Callum Hudson-Odoi missed his kick when presented with an excellent opportunity to get a shot in on goal, while Tammy Abraham failed to get a touch on Reece James’ inviting cross from close range.

Abraham then thought he should have had a penalty after 20 minutes when he went down under a challenge from Caglar Soyuncu but, after a VAR check, the appeals were waved away.

Leicester couldn’t find their rhythm, but they were presented with an excellent opportunity just before the break when Ayoze Perez intercepted Cesar Azpilicueta’s pass. He chested the ball into the path of Vardy but Caballero was alert to the danger, making a smart block with his legs to deny the former England forward.

Chelsea finally got the breakthrough 57 seconds after the break when Mason Mount’s corner to the far-post corner was headed in by Rudiger for his first goal for the Blues since October 2018.

Their lead lasted just eight minutes though, with Barnes netting a fourth goal in his last six outings when he cut inside onto his right foot and his shot deflected off James and flew over a stranded Caballero.

Leicester’s turnaround was complete 10 minutes later and it was a moment Caballero will want to forget. The goalkeeper, starting his first league game of the season after replacing Arrizabalaga, strayed off his line in search of Chilwell’s cross but he didn’t get to the ball, leaving him out of position as Youri Tielemans returned the ball for the England left-back finish at the far post.

Kepa Arrizabalaga was dropped by Chelsea boss Frank Lampard for the trip to Leicester. Willy Caballero replaced him for just his second Premier League appearance of the season, with Mason Mount, Reece James and Pedro all returning from their last league game against Arsenal.

Jamie Vardy was fit to start for the Foxes after a hamstring injury but Wilfred Ndidi was missing after pulling out late on to be replaced by Hamza Choudhury.

Tielemans’ drive was then turned away by Caballero, but it was Chelsea’s turn to respond 19 minutes from time. Ricardo Pereira fouled Mount and the midfielder picked out Rudiger from the resultant free-kick. The German defender rose highest in the penalty once again to loop a brilliant header into the top corner from 10 yards.

Despite the setback, Leicester should have won the game. Jonny Evans planted a free header well wide of the target before Barnes fluffed his lines with 11 minutes left. After a quick counter-attack from the hosts, Vardy’s cross found the winger unmarked with just Caballero to beat but he could only send the ball inches wide of the post as the spoils were shared.

Leicester boss Brendan Rodgers: “We’re disappointed not to have won the game. I thought we started both halves slow.

“We should have won having gone 2-1 up. We gifted them two goals really, which we’re disappointed with. Our concentration and organisation wasn’t quick enough in one or two players. But what we did was show a fantastic mentality to come from behind against a really good side with top-level players.

“Against a top team it might be deemed a good result, but we should win that game. But they’ve come from a tough game in midweek and battled to get a point.”

Chelsea boss Frank Lampard: “We were the better team in the first half, in terms of how we moved the ball, and we created some gilt-edged chances. In the second half we weren’t so fluid, and they created some good chances themselves.

“Toni Rudiger and Andreas Christensen were really good. Toni was aggressive, the second goal is a really great header, so I’m really pleased with him.”

When asked if Chelsea were still underdogs for the top four, he said: “We were underdogs at the start of the season. Not many people gave us the top four slot and I understand why, and it’s probably the same now. We’ve come to Leicester, who everyone’s raving about, quite rightly, and we’ve got a point. We move on.”

Man of the match – Antonio Rudiger

Rudiger made light of Chelsea’s failed striker search in the January transfer window after his brace earned a draw at Leicester.

The defender’s goals – his first for the Blues since October 2018 – ensured Frank Lampard’s fourth-placed side stayed eight points behind the Foxes and in doing so, he became the first defender to score twice in a Premier League match for Chelsea since John Terry did so against Fulham in April 2013.

Leicester and Chelsea both embark on their winter breaks.

Leicester return to action Friday, February 14 when they take on Wolves at Molineux; kick-off 8pm.

Chelsea are back in action on Monday, February 17. They face Manchester United at Stamford Bridge on Monday Night Football, live on Sky Sports; kick-off 8pm.