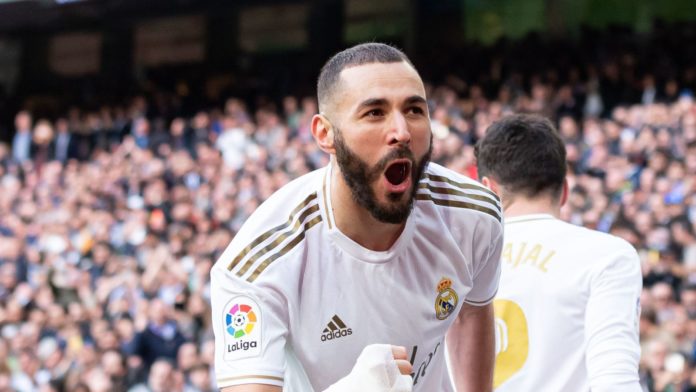 Karim Benzema scored for the first time in a Madrid derby at the Bernabeu as Real Madrid beat Atletico Madrid 1-0.

Real extended their unbeaten run in all competitions to 21 games and moved six points clear of Barcelona ahead of their clash with Levante on Sunday.

The two sides last met in the Spanish Super Cup final when Real needed penalties to claim the title after a 0-0 stalemate.

Bayern Munich took back the top spot in the Bundesliga with a 3-1 win over Mainz, while Borussia Dortmund’s Erling Haaland made it seven goals from three games.

The league’s top scorer, Robert Lewandowski, reached 22 with Bayern’s opening goal against Mainz. Bayern will finish the week top of the league for the first time since September after RB Leipzig could only salvage a 2-2 draw against 10-man Borussia Monchengladbach.

Haaland’s explosive start to life in Germany continued with two goals for Dortmund in a 5-0 hammering of Union Berlin. It was his first start in the Bundesliga after scoring five goals in two substitute appearances.

Bayern lead by a single point from Leipzig, with Dortmund and Gladbach two points further back.

Paris Saint-Germain extended their lead at the top of Ligue 1 to 13 points after thrashing Montpellier 5-0 at Parc des Princes.

Montpellier, who remain fourth, ended the game with nine men after goalkeeper Dimitry Bertaud and midfielder Joris Chotard were both sent off.

Pablo Sarabia opened the scoring for PSG before Bertaud was shown a straight red card in the 17th minute for handling outside the area.

Angel Di Maria and Daniel Congre’s own goal made it 3-0 at the break before Kylian Mbappe and Layvin Kurzawa struck in the second half.

Chotard was given his marching orders in the closing stages for his second yellow-card offence.

Lille replaced Montpellier in fourth spot as Victor Osimhen’s late penalty clinched them a 2-1 win at Strasbourg and Reims’ biggest win of the season, 4-1 at Angers, lifted them up to seventh.

Nimes boosted their survival hopes with a 3-1 home win against nine-man Monaco, for whom Tiemoue Bakayoko and Gelson Martins were both sent off in the 32nd minute.

Bakayoko’s yellow card for his foul on Romain Philippoteaux was upgraded to red by VAR and Martins followed him down the tunnel for protesting.