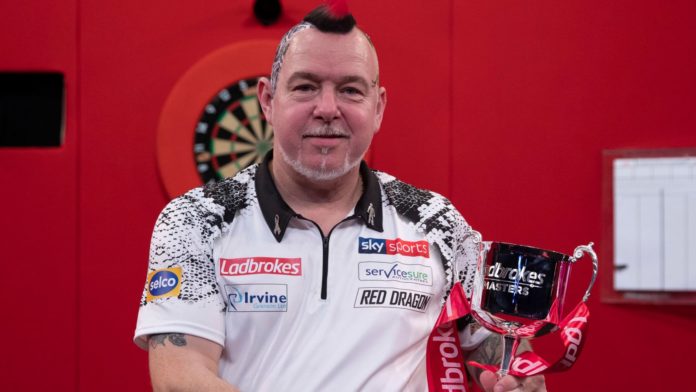 Premier League Darts returns on Thursday with Night One from Aberdeen, live on Sky Sports Action & Main Event from 7pm

Peter Wright started his 2020 season with another major televised title, beating Michael Smith 11-10 in a last-leg shootout to claim the year-opening Masters.

Snakebite made history by claiming his first world title on New Year’s Day at Alexandra Palace, ending a string of heartbreaking defeats in major finals with a 7-3 win over Michael van Gerwen.

He vowed after that he would go from strength-to-strength and made good at the first time of asking, beating Smith in an entertaining conclusion to the weekend that condemns Bully Boy to yet another defeat in a major TV final, the fifth of his career.

Smith missed three match darts in the decider which opened the door for Wright, who pounced to add the Masters title to his UK Open of 2017 and World Championship of just over a month ago.

Peter Wright winning all the time is boring. ???

It’s all going Wright for Snakey. You love to see it. He’s proved that everything comes to he who waits and Michael Smith can prove that at some point too. Better starts + a bit more composure on match darts. It’ll come. Maybe at Ally Pally next January…. ?

“I’m a very lucky player tonight, Michael should’ve won that,” said Wright, who heads to Aberdeen to face Van Gerwen on the opening night of Premier League action on Thursday.

“I’ve been in his position many times before, so I know how he’s feeling and it’s not nice.

“I’m obviously over the moon to win the first tournament of the year and hopefully there will be many more. I think my performance dipped at the end of the day, I started missing too many doubles so I need to cut that out.

Wright kicked off his year as champion by sinking Joe Cullen in the first round, he followed up on Sunday with a 10-0 whitewash of Dave Chisnall in the last eight and an 11-7 win over World Cup-winning colleague Gary Anderson to make the final.

Smith beat Suljovic and Adrian Lewis on his way to the last four where he needed a last-leg shootout to see off UK Open champion Nathan Aspinall to set up his date with Snakebite in the final in Milton Keynes.

Other than Wright’s triumph, Van Gerwen’s first defeat in the tournament since 2014 was the major storyline, the world No 1 was beaten by Welshman Jonny Clayton on the Marshall Arena stage,

MVG had been unbeaten in 20 games but Welsh No 2 Clayton’s superior doubling got him off to a flying start, a brilliant 116 finish the highlight of his three-leg burst to start the game.

Thrilling finish to start the season in front of a great crowd here in Milton Keynes.
Michael Smith’s first big trophy is surely only around the corner and Peter Wright’s the man who can’t lose at the moment!
On to Aberdeen and a capacity 7000 crowd to start the Premier League!

Van Gerwen fought his way back into the contest and when he drew level at 5-5 it looked like the Dutchman was ready to race to the finish line in his chase for a sixth successive title.

However it was Clayton who provided the surge, winning five of the next six legs for an impressive 10-6 success, but his delight was shortlived as The Ferret was beaten by Nathan Aspinall in Sunday’s quarter-final match-up.

Follow every week of the Premier League on Sky Sports, kicking off in Aberdeen on Thursday February 6 and 17 weeks of action continues every Thursday through until the Play-Offs on London on May 21.