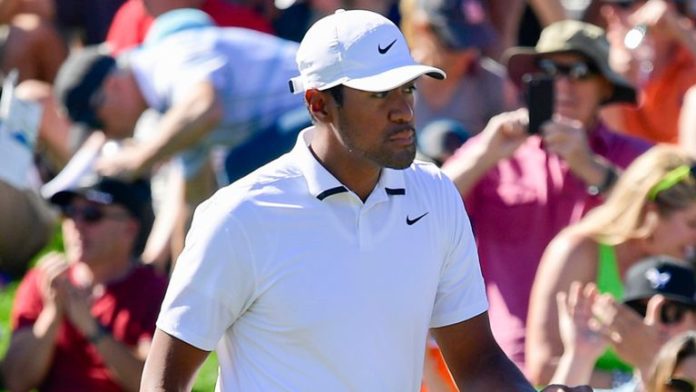 Finau took a one-shot lead into the final round at TPC Scottsdale and was two strokes clear with two holes to play, only for Simpson to produce a birdie-birdie finish to force a play-off.

Simpson then birdied the first sudden-death hole to claim a sixth PGA Tour win, leaving Finau still searching for a first title since his breakthrough success at the 2016 Puerto Rico Open.

“I definitely didn’t give him [Simpson] the tournament,” Finau said. “If you’re going to birdie 18 a couple times you’re probably going to win. He got the upper hand this time, but I love that guy and that’s one hell of a finish.

“I played nicely. Coming down the stretch I had some looks to win the golf tournament and they didn’t go my way today. That’s how the cookie crumbles and I’ll be back on the horse and ready to go again in a couple weeks.

“My game’s in a great place early in the season. My game’s better than it’s ever been. I have more confidence than I’ve ever had. If you know anything about me, I’ll persevere through anything. I’ll knock it [win No 2] off soon and will be on my way.”

Simpson’s victory is fifth consecutive worldwide top 10 and lifts him to world No 7, his highest ranking since 2012, with the 34-year-old pleased to return to the winner’s circle for the first time in 21 months.

“This golf course got even more firm than you planned on, so it was a tough day,” Finau said. “I didn’t have my best stuff, but I hung in there to birdie the last two holes and give myself a chance.

“Tony [Finau] hit a great putt in regulation and hats off to him, he played great. He is a great friend, our wives are friends and he’s one of the best guys on Tour, so it is a bit tough.

“You never want to see a guy play poorly. You hope you both play well and you hope you win by one, is kind of what we all feel. But he’s going to win many golf tournaments and at the same time, it’s fun to go head-to-head with a good buddy.”