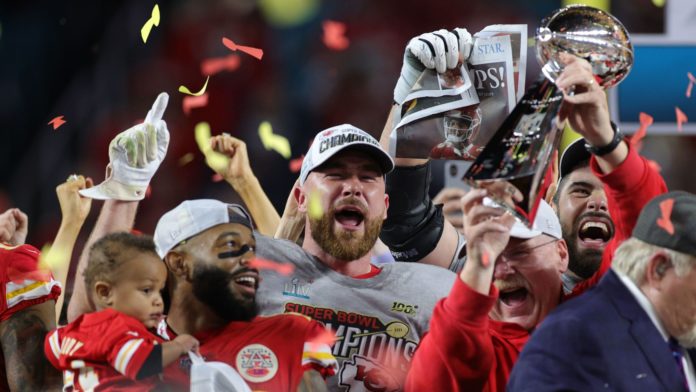 Jennifer Lopez and Shakira rocked the half-time show as the Kansas City Chiefs won their first Super Bowl in 50 years.

The Chiefs overcame a 10-point deficit in the fourth quarter of the game to beat the fancied San Francisco 49ers 31-20 in Miami.

Quarterback Patrick Mahomes – at 23 the youngest to be named Super Bowl most valuable player – led the underdogs who were last NFL champions in 1970, to an unexpected victory.

They trailed 20-10 but scored 21 unanswered points to take the title, continuing their habit of coming from behind in post-season games.

They had already rallied from deficits of 24-0 to beat Houston and 10-0 to get past Tennessee.

The 49ers, chasing a sixth Super Bowl, were left to rue their failure to close the game out.

Hits, fireworks, a small army of backing dancers and a cameo from Jennifer Lopez’s 11-year-old daughter were the highlights of her and Shakira’s colourful half-time show.

It was the first time the much-discussed interlude has been headlined by Latina women for decades – after Gloria Estefan sang at the showpiece event in 1992 and 1999.

Wearing a sparkling red two-piece, Shakira, 43, belted out a medley of some of her biggest songs, including Empire, She Wolf and Whenever, Wherever, singing in both Spanish and English.

As fireworks lit up the sky, she was joined on stage at the Hard Rock Stadium by Puerto Rican singer Bad Bunny and even went crowd surfing during her track Hips Don’t Lie.

Lopez, 50, arrived on a pole – a nod to her acclaimed turn in stripper drama Hustlers.

After changing from black leather to a skin-tight silver bodysuit, she wrapped herself in the Puerto Rico flag to cover Bruce Springsteen’s Born In The USA.

As the show climaxed, the singer, whose parents are Puerto Rican, was joined for a duet of Let’s Get Loud by her 11-year-old daughter, Emme, and Shakira returned for Waka Waka, her anthem for the 2010 World Cup in South Africa.

Shakira said the show was a proud moment for Latinos.

She wrote on Instagram: “We Latinos climbed Kilimanjaro and made history tonight and we couldn’t have done it without all of you!”

The Super Bowl half-time performance, one of the biggest gigs in music, was well-received online.

. @JLo and @shakira and all the special guests were so incredible!!! What a fun halftime show I danced and smiled the whole time. Such powerful sexy women!!!! On camera and off!!!!! Love you beautiful sexy talented women ?? #SuperBowlHalftimeShow #SuperBowl

Katy Perry and Lady Gaga were among those tweeting praise.

But Donald Trump hit a bum note, congratulating “the great state of Kansas”, forgetting Kansas City is in Missouri.

Congratulations to the Kansas City Chiefs on a great game and a fantastic comeback under immense pressure. We are proud of you and the Great State of Missouri. You are true Champions!

The tweet was later taken down and corrected by the US president, but not before his error was noticed by a wide audience.