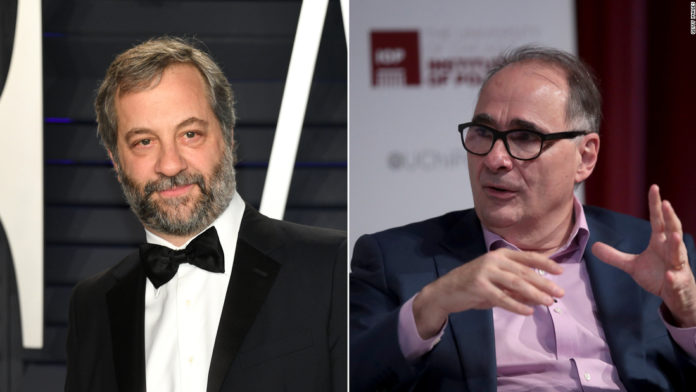 The former Chief Strategist for Barack Obama’s presidential campaigns kicked off their discussion by telling Apatow how much he loves the mind of a comic, and Apatow quickly returned the compliment by getting into the humor of politics.
The movie producer revealed that after meeting former Obama speechwriter Jon Lovett in 2010, he kept dreaming of writing jokes for the president at the annual White House Correspondents’ Dinner. At first, Apatow said, Lovett blew him off. But a year later, Apatow was called upon to contribute.
“When I worked at the Correspondents’ Dinner and gave some jokes that were performed, I was just amazed at how good he [Obama] was at standup,” Apatow recalled.
Axelrod quipped that Apatow, an outspoken critic of President Donald Trump, has to “take some responsibility” for Trump being in the White House. He said some of the lines Apatow wrote for the dinner seemed to inspire Trump to run for office.
“Although Judd Apatow, you have to take some responsibility for the current events because you participated in maybe the most famous Obama White House Correspondents’ Dinner routine ever, which was 2011,” he said. “Donald Trump was sitting in the audience. I think I was two tables away from him and watched his face as these jokes landed.”
Axelrod continued: “You couldn’t help but do it [watch] because they were so brutal. But one particular joke was the president recounting some of the highlights of that season’s ‘Apprentice’ in the context of, you know, leadership and, well played, sir.”
Trump was also on the receiving end of some jokes the same evening by comedian Seth Meyers.
[embedded content]
And that, Axelrod said in jest, is why Trump is president today.
“I’ve got enough guilt as a Jew,” Apatow cracked back. “I don’t need to be responsible for Trump.”
The episode dropped Monday on “The Axe Files.”