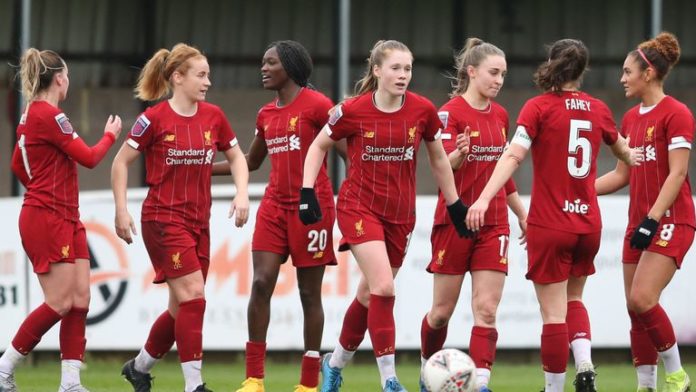 Smith: “I think Liverpool need to look elsewhere now, because this can’t keep happening. It’s not good for the fans”

Liverpool Women’s pitch problems at Prenton Park are “not good enough” and are damaging to women’s football, says Sue Smith.

Liverpool play their matches at the home of Sky Bet League One side Tranmere but have seen their past two home games in the Women’s Super League postponed due to issues with the surface.

Since their clash against rivals Manchester United was called off on January 12, Tranmere have played on the pitch four times in the space of 12 days, with Liverpool Women moving their FA Cup match against Blackburn to Bamber Bridge.

Their WSL meeting with Birmingham at Prenton Park was cancelled on Sunday close before kick-off due to a waterlogged pitch after the referee deemed part of the surface unplayable.

“There’s too many games being played on that pitch,” Smith told Sky Sports News. “I think Liverpool need to look elsewhere now, because this can’t keep happening. It’s not good for the fans.

“I think it was only an hour before kick-off that the game was called off. Fans would have been going and we’re trying to get more fans to watch women’s football so when things like this are happening it’s not good enough.

“Liverpool need to look elsewhere for a pitch.”

Peter Moore, chairman of Liverpool Women, issued a statement on Sunday insisting that the club were working on a solution.

“We know how frustrating this is for supporters as well as the players and staff of both clubs who have put in a hard week of preparation for the game,” he said.

“I speak regularly with Mark Palios at Tranmere and we had a solid pitch on Saturday but overnight rain saw it deteriorate despite the best efforts of all the hard-working grounds staff at Tranmere acting in conjunction with our own grounds team.

“While these problems are not unique to us – with other Women’s Super League games called off both on Sunday and earlier this season – we need to try to find a solution to provide our LFC Women with the surface they deserve.

“To that end we will continue to explore all the options open to us.”