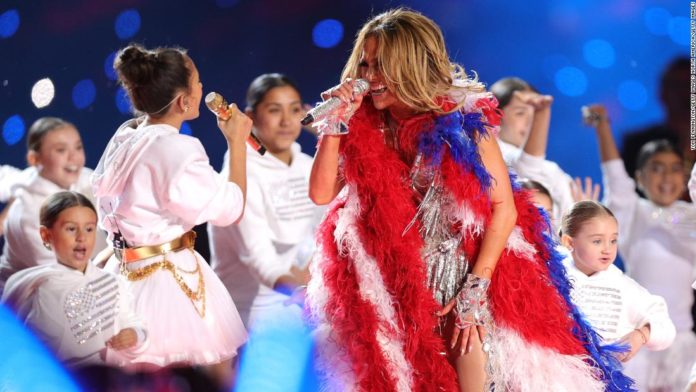 On Instagram, the superstar, who co-headlined the halftime show with Shakira, shared a video from moments before she walked on stage. In the caption, she said she wants “the little girls on stage with me and all over the world” to know “how to use their voices and be proud of everything they are.”
“We are proud to recognize that all of us together are what makes this beautiful country truly great,” she wrote.
An earlier version of Lopez’s caption included a reference to “other people” who “try to build walls, keep us out or put us in cages.” It was later edited out.
Political and cultural themes ran through the veins of Sunday’s halftime show in a way that was unmissable.
The children she referenced were seen both on stage with her and in cage-like structures that viewers understood to be a statement on the ongoing border crisis. Lopez’s 11-year-old daughter, Emme Maribel Muñiz, also joined her mother on stage, singing a solo alongside a children’s choir.
At one point, Lopez sported a feather coat that featured the Puerto Rican flag on one side and the American flag on the other, a message of unity.
The Super Bowl halftime show was viewed by 103 million people, according to Nielsen Media Research via Fox, which aired the game. That number represents a 4% growth over last year’s show, which was headlined by Maroon 5.