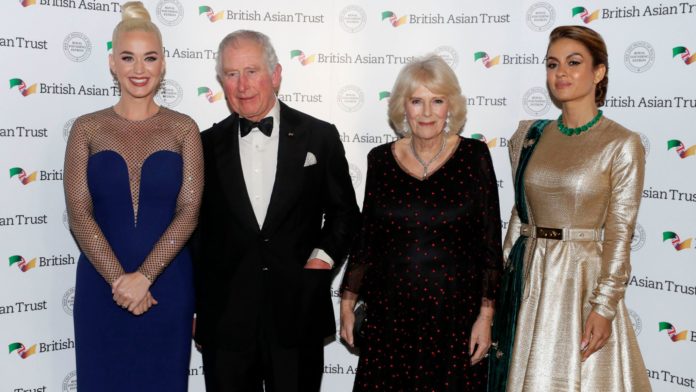 Superstar Katy Perry has promised to sing to Prince Charles’ plants as she became an ambassador for his anti-trafficking charity.

The Roar singer greeted the Prince of Wales with “hello, again” as she was named an ambassador of his British Asian Trust (BAT) as part of a major drive against child trafficking.

Perry joined Charles and the Duchess of Cornwall at a black tie dinner at Banqueting House in London on Tuesday night, having previously met ahead of his birthday in November.

Introducing the prince on stage, the singer said: “I’m excited to be here because I’m a big fan of his royal highness and all the work that he has done and is continuing to do, especially in India for children.

“In my own personal experience, he has an incredibly kind soul.

“So kind, that yes, sometimes he talks to his plants.

“And he asked me if I could sing to his plants.

The pair were seen laughing together before appearing on stage, with the singer said to have told him she had heard he talked to his plants.

“I would prefer it if you sang to them,” Charles is said to have replied.

“She told me just now that she wanted to make it slightly more spicy, but I think she resisted the temptation,” he said.

“But I must say it was a great pleasure to have met her in Mumbai last November at a gathering for British Asian Trust council members on the day before my birthday.

“Meeting her turned out to be a wonderful birthday present.”

They were supporting the development of the largest anti-trafficking fund ever seen in South Asia by the BAT, billionaire Sir Chris Hohn and the Children’s Investment Fund Foundation (CIFF).

There are believed to be 5.8 million children working in forced labour in India, with tens of thousands thought to be in dangerous workshops in Jaipur alone, producing goods including embroidery and bangles, with many forced to work for up to 15 hours a day.

Indian philanthropist Natasha Poonawall has made a multimillion-pound pledge to the fund, while CIFF will match everything raised up to £25m.

Richard Hawkes, chief executive of BAT which was founded by Charles in 2007, said he was pleased Perry was joining as she is “such a massive global superstar” who will make people more aware of their work.