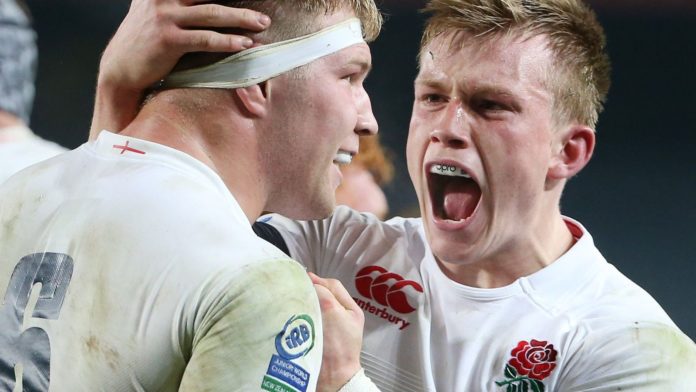 Ross Moriarty and Nick Tompkins helped England win a World Cup but their sights are now set on Six Nations glory with Wales after an unlikely reunion.

Both players starred when an England team captained by Maro Itoje lifted the U20 world title in New Zealand six years ago.

Moriarty has gone on to win 42 caps in the Wales back row, and he is back in tandem with Saracens centre Tompkins.

Plucked from the Premiership by new Wales head coach Wayne Pivac – via qualification, courtesy of Tompkins’ Wrexham-born grandmother – he made a scintillating debut against Italy last weekend.

Such was the impact of Tompkins’ try-scoring contribution that Pivac has been widely backed to hand him a first Wales start in Saturday’s Dublin appointment with Ireland.

“I was a bit nervous for him with it being his first cap,” said Moriarty.

“You don’t want anyone to make any mistakes or for it to get to them too much, but I thought that he looked very good.

“He injected a lovely bit of pace to finish off his try, and I don’t think that he could have asked for a better start to his international career.

“Nick will take confidence from that, although we know that it will be a different sort of challenge in Ireland.

“I did [England] U18s with him first, and then in my second year with the U20s Nick was in. He was the same then – very agile, very fast, with great skills.

“It’s nice to have him here. He is a good boy, and we have all welcomed him in.”

If Pivac opts for Tompkins, then it seems likely George North will revert back to the wing instead of Johnny McNicholl, and that could be the sum total of any changes.

Moriarty and company will claim a Welsh record ninth successive Six Nations victory if they beat Ireland at the Aviva Stadium.

But Ireland were the last team to defeat them in the tournament, winning 37-27 two years ago at a ground where Wales have not won in the Six Nations since 2012.

Moriarty added: “We had a good start, but there are a lot of things that we’ve got to work on in quite a few areas of the game.

“The result [against Italy] was good, but we can’t let that get to us and we know that we’ve got to put a big, big performance in against Ireland.

“You know what it’s like when you go to Ireland or Scotland. The fans are on you, one good thing happens for the team and their tails are up, the same as when people come to the Principality Stadium.

“It’s the same sort of atmosphere. We know what we have got to do to keep the crowd quiet and keep their team quiet.

“Ireland have a big bag of tricks, and we did great against them last year in the Six Nations [Wales won 25-7 in Cardiff] on a pretty poor day with the rain.

“Hopefully the weather is better this weekend and we can show what we can do with ball in hand.

“We are here to win the championship again and win the Grand Slam again.

“We aren’t looking at past games because we have new coaches, some new philosophies and we are concentrating on the now rather than worrying about what has happened in the past.”