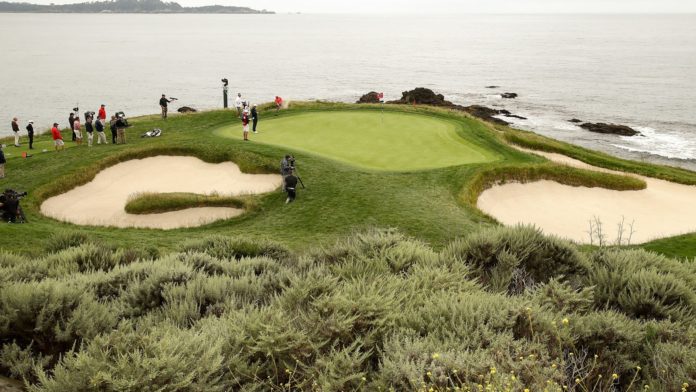 The 2020 golf calendar visits some of the most iconic par-three holes, with this week’s AT&T Pebble Beach Pro-Am offering a couple of notable contenders.

The California course boasts the seventh, where players hit from an elevated tee into a small green guarded by bunkers and the Pacific Ocean, while water also protects the 17th green made famous by Tom Watson’s chip-in during the 1982 US Open.

TPC Sawgrass and the Players Championship has the 17th and its Island Green as their standout hole, while Augusta National has the 12th – dubbed the Golden Bell – as the middle section of its notorious Amen Corner.

The Masters venue also has the 16th, where Bryson DeChambeau made a hole-in-one during the final round of last year’s opening major of the year, with the 16th hole at Royal St George’s – home of this year’s Open – another memorable par-three.

Royal Troon hosts this year’s Women’s British Open, live on Sky Sports, and has the ‘Postage Stamp’ for its eighth hole, while the 17th hole at Whistling Straits – the 2020 Ryder Cup venue – has Lake Michigan surrounding one side of the green.

The Amateur Championship is held at Royal Birkdale this year, where Jordan Spieth famous birdied the par-three 14th on his way to lifting the Claret Jug in 2017, while the Irish Open’s Mount Juliet venue brags the third as the best of their par-threes.

Which is your favourite? Rank the best par-threes in golf from our shortlist!

Is there an iconic par-three that hasn’t been mentioned? Which hole would you like to see in the list? Let us know by tweeting @SkySportsGolf!