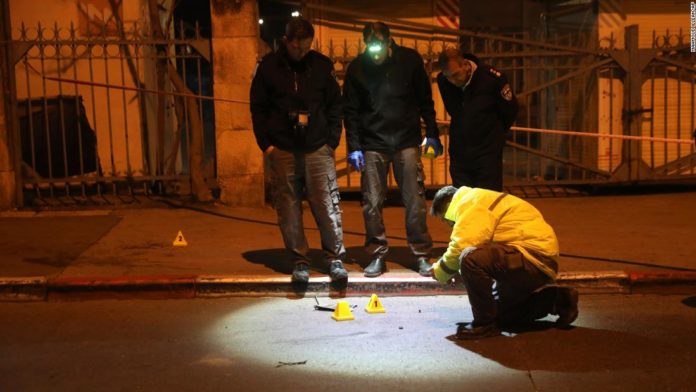 Early Thursday morning, a Palestinian assailant carried out a ramming attack against Israeli soldiers in Jerusalem, a spokesman for the Israel Defense Forces (IDF) said. The soldiers, who were new recruits in the Golani infantry unit, were at the First Station in Jerusalem when the incident happened, the IDF said. The First Station is a popular tourist site near the Old City that’s built upon an old train station. One soldier was seriously injured, but his condition is not believed to be life-threatening, said Lt. Col. Jonathan Conricus. The others sustained minor injuries.
“On behalf of all citizens of Israel, I send wishes for a quick recovery to the wounded soldiers,” said Prime Minister Benjamin Netanyahu in a statement. “It is only a question of time — and not much time — until we apprehend the attacker. Terrorism will not defeat us; we will win!”
The IDF, working with the Israel Security Agency and the police, are searching for the assailant.
Hamas praised the ramming attack, calling it a “heroic operation” and hailing it as a “new stage of revolution” against Israel.
In the Old City of Jerusalem Thursday afternoon, an attacker opened fire at police officers standing near Lion’s Gate, one of the entrances for Muslim worshippers to the al-Aqsa mosque. One border police officer was injured and the attacker was shot and killed, Israeli police said. Police spokesman Micky Rosenfeld said entrances to the Old City of Jerusalem and alleyways leading to the al-Aqsa mosque were closed for a short time after the attack.
The attacks come amid a series of violent incidents over the last 24 hours in Israel, the West Bank, and Gaza.
Palestinian factions, including Hamas in Gaza and Fatah in the West Bank, had called for two days of protests following the release of the Trump administration’s Middle East plan. The initial wave of protests last week dissipated, but they appear to have returned this week with an increased intensity throughout the West Bank, including Ramallah, Jenin, Hebron, and Qalqilya.
“All options are open to our people to defend our rights, and to confront the deal of the century,” a spokesman for Hamas said Thursday, referring to Trump’s plan.
In the Jenin refugee camp in the northern West Bank, clashes broke out as the IDF demolished the home of Ahmad Qanba’, who was convicted in the January 2018 killing of Rabbi Raziel Shevach.
During the unrest, Conricus said a Palestinian sniper had fired on Israeli troops “for the first time in a long time,” and was shot dead. They were demolishing Qanba’s house because he took part in the shooting and killing of Rabbi Raziel Shevach, IDF said.
“Our troops in Jenin were fired upon by what appears was sniper fire, retaliated, and reported that they were able to kill the sniper,” Conricus said.
The Palestinian Ministry of Health identified the deceased as 19-year-old Yazan Abu Tabikh. Fatah, the governing party in the Palestinian Authority, said he was an officer in the Palestinian security forces.
During the exchange of fire in Jenin, a Palestinian police officer was also shot and killed, according to Fatah. Twenty-four-year-old Tareq Badwan was shot in the stomach and died from his injuries Thursday afternoon, according to the Ministry of Health.
A video posted on social media by Fatah purports to show Badwan standing at the entrance to his work early Thursday morning when he is suddenly shot and collapses onto the ground. He is not seen taking part in any demonstrations or clashes with Israeli security forces in the video.
The deaths of Abu Tabikh and Badwan are likely to further strain the security coordination between Israel and the Palestinian Authority. Last week, Palestinian Authority President Mahmoud Abbas threatened to suspend the coordination — seen as important to both sides — though it remains at the level of a threat.
On Wednesday afternoon, during clashes in Hebron in the southern West Bank, a Palestinian teenager was shot and killed after throwing a Molotov cocktail at Israeli soldiers. 17-year-old Mohammad Haddad was shot in the chest and killed, according to the Palestinian Ministry of Health.
“During a violent riot which was instigated a short while ago in the city of Hebron, IDF troops identified a Palestinian who hurled a Molotov cocktail at them. The troops responded with fire in order to remove the threat,” the IDF said in a statement.
The last week has also seen increased rocket and mortar fire from Gaza, as well as a sharp increase in the launching of balloons carrying explosive devices.
Late Wednesday night, three mortars were fired from Gaza into southern Israel, the IDF said, hitting open areas. In response, the IDF struck Hamas military infrastructure in central and southern Gaza, including an underground complex.
The IDF holds Hamas responsible for the ongoing fire. Conricus said it is “very clear that they are involved in and facilitating” the rocket and mortar fire.
The European Union Ambassador to Israel, Emanuele Giaufret, warned of the dangers of escalation, saying on Twitter, “Following with concern the rise of tensions and spike of violence. My thoughts are with the families of victims and I wish a speedy recovery to those who were injured. Violence is never justified.”