Home World US preacher dropped by every UK tour venue 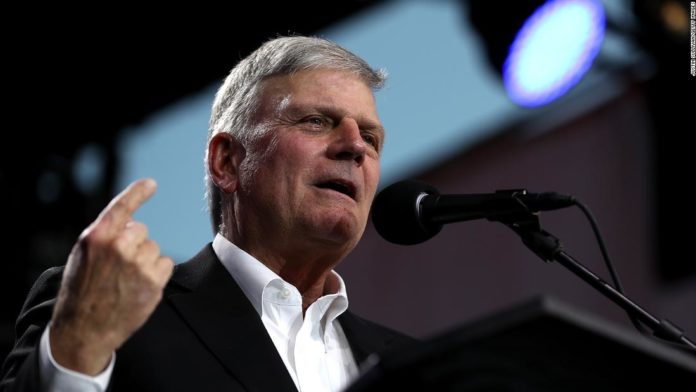 Graham — the son of preacher Billy Graham — has called Islam “evil,” attacked laws increasing rights for transgender people, and told his followers that the legalization of same-sex marriage was orchestrated by Satan.
Now, every venue booked by Graham as part of a lengthy summer tour of the UK has told him not to come.
An arena in Newcastle upon Tyne became the seventh and final venue to cancel his scheduled appearance on Wednesday. The move follows similar decisions by venues in other British cities, including Birmingham, Liverpool and Sheffield.
Graham, one of the most high-profile speakers in the US, is the president of the Billy Graham Evangelistic Association and an outspoken supporter of US President Donald Trump, whose election he believes was enabled by God. Graham has spoken at multiple rallies held by Trump.
He has more than 10 million fans across his social media profiles, but has fueled anger for several of his past comments and stances.
Graham has expressed support for conversion therapy and called homosexuality a sin and abomination. He called Islam a “wicked and evil” religion and falsely suggested former US President Barack Obama was “born a Muslim.”
In April Graham was also condemned for writing that Democratic presidential candidate Pete Buttigieg’s homosexuality is “something to be repentant of, not something to be flaunted, praised or politicized.”
A petition calling for Newcastle’s Utilita Arena to drop Graham had been signed more than 5,000 times, and the venue told CNN they made the decision “following talks with our partners and relevant stakeholders.”
“Franklin Graham’s views are wholly inconsistent with our city, which is preparing to welcome huge celebrations and tens of thousands of people this summer for UK Pride,” Ste Dunn, chair of the Northern Pride group, said on the petition site.
Though his tour is currently without a venue, Graham has said he intends for it to continue and will make arrangements at alternative sites.
“We are still finalising where the Graham Tour will be held, but we want to be clear that the initiative and all associated training courses will take place on the same dates as originally planned,” a statement on the BGEA’s website says. CNN has contacted the organization for comment.
Graham’s father, Billy, is reported to have persuaded more than 3 million people to commit their lives to Christianity and his preaching was heard in 185 of the world’s 195 countries, according to the BGEA. He died in 2018 at the age of 99.

A happy ending after homeless woman’s story featured on TV