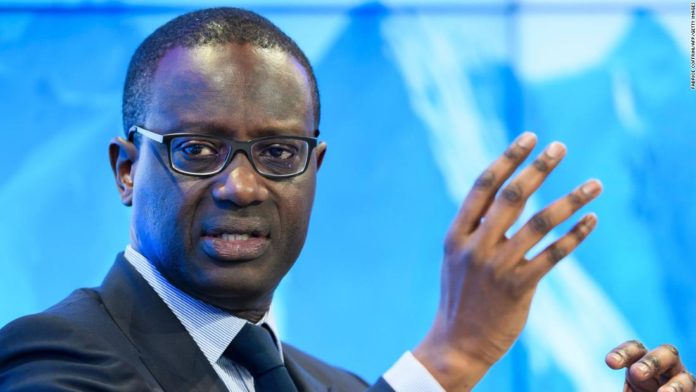 The board of directors unanimously accepted Thiam’s resignation at a meeting on Thursday, appointing Credit Suisse (CS) veteran Thomas Gottstein as the new CEO, the Swiss investment bank said in a statement Friday.
Last year, Credit Suisse’s ex-chief operating officer, Pierre-Olivier Bouée, was implicated in two separate spying operations, one involving the former head of wealth management Iqbal Khan. Khan had left Credit Suisse for crosstown rival UBS (UBS).
Bouée stepped down after that operation came to light. More recently, he was blamed for ordering a spying operation on Credit Suisse’s former head of human resources for several days last February.
“I had no knowledge of the observation of two former colleagues. It undoubtedly disturbed Credit Suisse and caused anxiety and hurt. I regret that this happened and it should never have taken place,” Thiam said in the statement.
Thiam will step down following the presentation of 2019’s fourth quarter and annual results next week.
Credit Suisse said previously that former COO Bouée had not informed Thiam or any other member of the bank’s senior leadership of the surveillance on Khan. It added in December that it found no indication that Thiam and other members of the executive board or board of directors knew anything about the second spying case until the media reported on it.
Bouée and Thiam worked closely together for nearly two decades at various firms before joining the Swiss bank, according to their Credit Suisse biographies. The pair were at McKinsey in Paris between 2000 and 2002. Bouée followed Thiam to British insurer Aviva (AVVIY) in 2004. They both joined Prudential, another British insurer, in 2008 before heading to Credit Suisse in 2015.
In Friday’s statement, the bank’s lead independent director Severin Schwan said Chairman Urs Rohner had led the board “commendably during this turbulent time.”
“After careful deliberations, the Board has been unanimous in its actions, as well as in reaffirming its full support for the chairman to complete his term until April 2021,” Schwan added.

Ireland’s mother and baby home survivors have spent decades fighting for the truth. They can finally see an end in sight