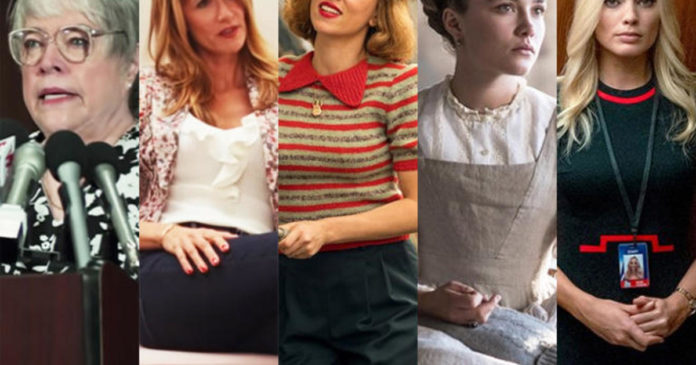 Check out clips and interviews below with the five nominees for this year’s Academy Award for Best Supporting Actress.

Winners of this year’s Oscars will be announced on Sunday, February 9, at the Dolby Theatre at Hollywood & Highland Center in Hollywood.

An Oscar-winner for “Misery” (and previously nominated for “Primary Colors” and “About Schmidt”), Kathy Bates was recognized for her performance as Bobi Jewell, mother of a security guard who is wrong suspected of planting a bomb at the 1996 Atlanta Olympic Games, in Clint Eastwood’s “Richard Jewell.”

In this scene Bobi addresses a press conference to decry the systematic hounding of her and her son by both the FBI and the media. Bates’ wavering voice reveals her character’s vulnerability – a “civilian” unused to public exposure – and an anger she has not given herself dispensation to acknowledge.

Bates told Deadline how she researched the role by meeting with Bobi herself: “We sat and talked for two or three hours and I recorded her voice. We went through the script and she corrected a few things. She teared up quite a few times. She was very determined. She gave me the Vanity Fair article that Marie Brenner had written that the film is based on. Bobi looked very different then, she was more my size, so that made me feel good.

“At one point I said, ‘I just want to get this right for you, Bobi.’ And almost like a little girl, she said, ‘Well, just be me.’ And I thought, ‘Oh God, if that were true, I’d have 15 Academy Awards by now.’ I had to, as an actor, create a character of Bobi, otherwise it would have been robotic. You can’t just go in and try to mimic somebody.'”

As Nora Fanshaw, the high-powered divorce lawyer whom Scarlett Johansson’s Nicole seeks out for help in the dissolution of her marriage, Laura Dern brings a terrific mix of motherly concern and feminist indignation. Nominated twice before for Oscars (for “Rambling Rose” and “Wild”), Dern received a lot of attention for her showstopping monologue about motherhood, in which she lays out the inequality that faces women in divorce court (it’s a speech in which she ad-libbed a rather blasphemous take on Mary and God). But she is even better in legal hearings where she tangles with the lawyer (Ray Liotta) for Nicole’s soon-to-be ex-husband, Charlie (Adam Driver).

After she first read the script by writer-director Noah Baumbach, Dern told “Sunday Morning” correspondent Tracy Smith, “I called Noah and got his voicemail and cried into his machine for about 10 minutes.”

But she could bring even more emotional intensity to her performance; some of the film’s lawyer scenes were filmed in the same law office where, in 2012, Dern had met with her own attorney when she filed divorce papers against musician Ben Harper.

In Taika Waititi’s World War II comedy “Jojo Rabbit,” a 10-year-old boy, Jojo (Roman Griffin Davis), tries to make sense of the final days of the Nazi regime – and discovers the secret resistance work of his mother, Rosie (Scarlett Johansson), a woman living under desperate circumstances who tries to protect her child from the dangers that less naïve eyes can see.

In this scene, Rosie and Jojo (accompanied by his imaginary friend, Adolf Hitler, played by Waititi) debate the war over the dinner table, with a plate of food that – we will soon learn – has a different, surprising destination.

Johansson earned her first Academy Award nomination this year for “Jojo Rabbit” – actually her first two (she’s also nominated for Best Actress for “Marriage Story”), and she demonstrates both a flair for slapstick and a poignant bond with her young costar.

She told “Sunday Morning” correspondent Tracy Smith that her “Avengers” castmate Chris Hemsworth told her about the “Jojo” script, which he said was one of the best he’d ever read. “I just fell in love with the character of Rosie so much,” Johansson said. “It’s very rare to feel that way when you’re reading something that, you know, you fall in love with a character like that just off the page.”

Smith asked Johansson, “You have ancestors who died in the Holocaust. Did you have any reservations about doing a comedy about Nazis?”

“I never thought about that, the film, as such,” she replied. “I think it’s really a very triumphant story. And such a Valentine for single moms and independent women.”

Greta Gerwig’s adaptation of the Louisa May Alcott classic sets out different and often competing storylines for each of the four March sisters, told in “present day” and in flashback. As young Amy, Florence Pugh juggles both the pressures to marry and her own ambition to become an artist – goals which a trip to Paris may either assist in happening or lead to cruel disappointment.

In this scene Amy expresses her independent ideals and the financial considerations of marriage to March family friend and quasi-romantic interest Laurie (Timothée Chalamet).

Pugh (who also gave a terrific performance in last summer’s horror film “Midsommar”) portrays Amy as one of the more level-headed of the March girls. Avoiding a viewpoint that would be too anachronistic for a tale set in the mid-19th century, she still manages to present Amy as a willful figure who will not let the failures of a male define her. Amy also comes across as less bratty and selfish than in other film versions of the Alcott book. “I’m always in love with cheeky kids,” Pugh told the Hollywood Reporter. “Every single film that has a brat in it, I’m like, ‘That would have been so fun to play.’ But it was so exciting to go through the book and realize that actually this woman is so intelligent, and she’s realistic. She has a brain on her.”

In this interview with Stephen Colbert on CBS’ “The Late Show,” Pugh talked about working with an acting legend, Meryl Streep, and how she, despite her efforts to keep her composure, geeked out:

In addition to her acclaimed turn this year as Sharon Tate in Quentin Tarantino’s “Once Upon a Time… in Hollywood,” Margot Robbie (previously nominated for Best Actress for the mockumentary “I, Tonya”) gives a deftly balanced performance as Kayla, an aspiring broadcast journalist who discovers that success at the Fox News Channel is predicated on certain demeaning and sexually abusive behaviors from Fox News CEO Roger Ailes (a superb John Lithgow).

In this scene Kayla breaks down in front of her coworker and confidante Jess (Kate McKinnon), a woman whose clear-eyed view of their work environment comes with a desire to keep her nose down just to survive in a questionable job market, one in which, she is convinced, Fox on a resume means career suicide.

In this #MeToo-era comedy-drama, Robbie’s character (unlike Charlize Theron’s Megyn Kelly or Nicole Kidman’s Gretchen Carlson) is a fictional one, which gives the actress a wider lens through which to express her ambition, humiliation and, finally, determination.

“A character always starts off as just this bit of writing on the page,” Robbie told Variety in discussing how she brought Kayla – a sexually-fluid woman who ends up in bed with a woman, a Democrat no less! – “And then by the end of it, she’s such a real person to me.”

In this on-set interview with the stars of “Bombshell” presented by ET Canada, Robbie said, “Up until reading this script, I guess I’d been so encouraged that the revolution was getting up on its feet, that I don’t think we’ve really had the chance to explore it, explore the murky, gray areas. … It’s not a story of victimization; it’s so much more complicated than that.”