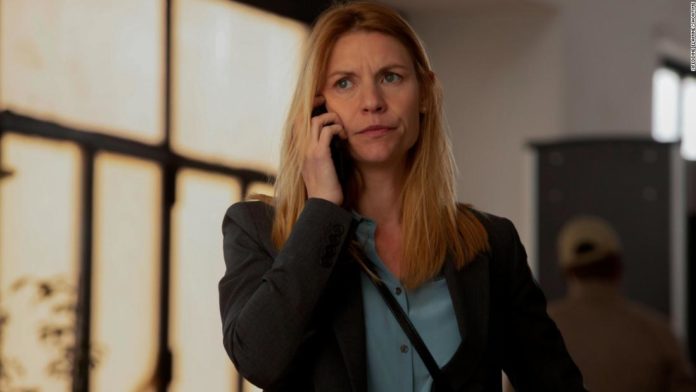 Granted, the Showtime drama flamed so brightly at first, with its “The Manchurian Candidate” overtones, that it has often felt like a pallid imitation in the intervening years. That said, there have been memorable aspects to the way its storylines have paralleled the war against terrorism, and specifically the costs and tradeoffs to a functioning democracy associated with prosecuting it.
Having waged that battle at great personal cost, Carrie (Claire Danes) has just been released from roughly seven months in the custody of the Russians, raising questions about the lingering effects of that incarceration.
“We may be dealing with a compromised officer here,” one of the bureaucrats involved warns, with Carrie fuzzy on much of what transpired during that time.
Still, her former mentor Saul (Mandy Patinkin), now the National Security Advisor to the current president (Beau Bridges), needs her assistance as he pursues a clandestine effort to negotiate peace with the Taliban, determined to bring the years-old conflict to an end.
Not surprisingly, there are various complications associated with that process, questions about who can be trusted both at home and abroad, and the added degree of difficulty that Carrie might not be able to hold herself together long enough to carry out the mission. That includes awkward run-ins with a Russian agent (“The Americans'” Costa Ronin) who seems to know more about what Carrie endured than she does.
As usual, it’s all shot in a tense, thriller-type fashion, with a smarter-than-the-average-TV-drama approach to international politics; still, current events have frequently threatened to lap the series, which once felt so cutting edge and prescient, and now often finds itself chasing the curve rather than leading it.
Stripping those considerations away, Danes and Patinkin remain among the most compelling performers around, and the stakes over the four episodes previewed are certainly steep.
In hindsight, though, the three-year renewal that Showtime gave the series in 2016 hasn’t paid off in the sort of steady build toward the finale that might have been anticipated.
That could change down the home stretch, but a show that stood among TV’s best in its first season — when it won the Emmy and Golden Globes for outstanding drama — approaches the finish line needing a strong kick to overcome a sense that the end is overdue.
With “Homeland,” the future is always a bit murky, but if these first steps are any indication, it’s still struggling to live up to that past.
“Homeland” premieres Feb. 9 at 9 p.m. on Showtime.