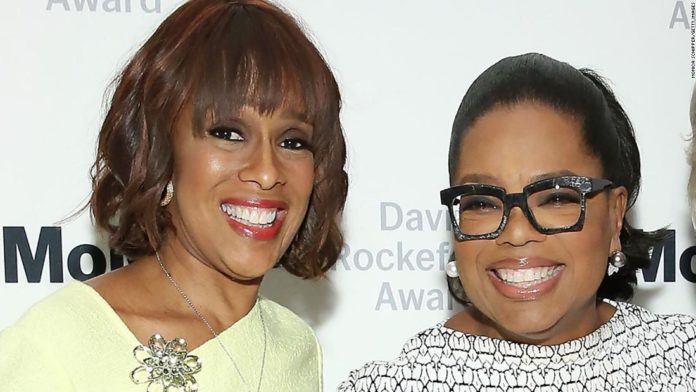 Winfrey started choking up during an appearance on “Today” with Hoda Kotb and Jenna Bush Hager while talking about the backlash against her BFF, Gayle King, over a recent interview.
“She is not doing well,” Winfrey said as she teared up. “She is not doing well because she now has death threats and has to now travel with security. She is feeling very much attacked.”
King has been majorly criticized for asking former basketball player Lisa Leslie about rape allegations made against the late NBA star Kobe Bryant.
Bryant and his 13-year-old daughter Gianna were part of a group of nine people who were killed last month in a helicopter crash in Calabasas, California.
On Thursday, King expressed anger at her “CBS This Morning” bosses for releasing what she felt was a “salacious” and “out of context” clip of her interview with Leslie.
Winfrey backed up her best friend of several decades on Friday.
“She’s not doing well and feels that she was put in a really terrible position,” Winfrey said. “Because that interview had already ran and in the context of the interview, everyone seemed fine, including Lisa Leslie.”
Winfrey said she understands why people are upset based on the clip, but added that King “hasn’t slept in two days.”
“Anybody can criticize anything, but the misogynistic vitriol to the point where it is dangerous to be in the streets alone …” Winfrey said, trailing off. “Because it’s not just the people who are attacking. It’s the other people who feel like they can take that message and do whatever they want.”
CBS News said in a statement Thursday that King “conducted a thoughtful, wide-ranging interview” with Leslie and that the clip that was posted “did not reflect the nature and tone of the full interview.”
“We are addressing the internal process that led to this and changes have already been made,” a spokesperson said in the statement.