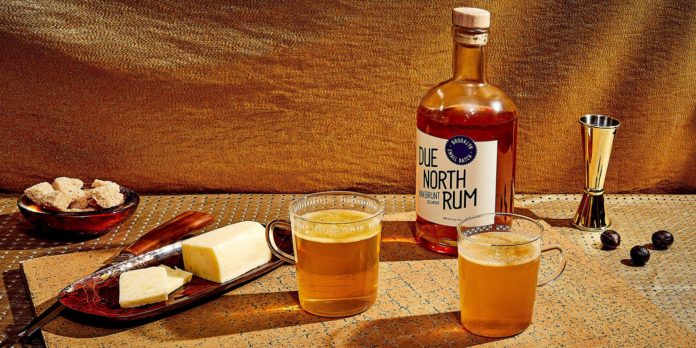 Fat. Sugar. Booze. These are three things Americans can rally around. A Hot Buttered Rum combines them all—fat in the form of a hunk of unsalted butter, sugar in cubes (demerara works best), and a darker rum to make it kick. Put them in a glass mug (because it looks cool), add hot water, and top with nutmeg. The butter will foam up the top of your HBR, creating a layer of rich, oily decadence.

Alternatively, you can put the sugar and rum in a mug and sizzle it with a squealing hot fireplace poker, then top it with butter and nutmeg, as we suggested in the February ’08 issue of Esquire. If you are so blessed with a fireplace in which to heat up a fireplace poker, then hell yeah, go for the dramatic dramatic. Even more dramatic? In 1957, Esquire suggested dipping a sugar cube in 151-proof rum, lighting it on fire, and dropping it into the cocktail “at the height of burning with the incantation Yo-ho-ho!” Pretty wild!

But per these instructions, it’s really as simple as making tea, just more therapeutic for your cold, shuttered soul as it trudges through another winter.

Hot Buttered Rum kept New England warm and inebriated through many a winter, back in the pre-war days. The pre-Revolutionary War days, that is. The drink was more widely popularized by the 1937 best-selling novel Northwest Passage about British soldiers fighting in the American Frontier, which waxed poetically about how hot buttered rum could overpower even a wild cat: “After a man’s had two—three drinks of hot buttered rum, he don’t shoot a catamount; all he’s got to do is walk up to him and kiss him just once; then put him in his bag, all limp.” HBR showed up in the 1940 film adaption of Northwest Passage, too. From there, it was picked up by the tiki world and written about by cocktail experts. For example, Charles Browne, author of the 1939 The Gun Club Drink Book, declared that the butter was an excellent means of lubricating a mustache. And to this day, Hot Buttered Rum remains a classic for when it’s time to hunker down for winter. Or go on a catamount hunt.

Hot cocktails have a special place in our heart—as in, they seep into our ventricles and warm them from within, which we very much appreciate when the weather’s not so great—so it’s good that there are a few to choose from. A Hot Toddy is like hot whiskey tea, while an Irish Coffee is like hot whiskey coffee. Mulled Wine gives you a red wine option, too. And to up the ante on your HBR, you can add a little apple cider.

Here’s what you need to do a Hot Buttered Rum justice, beyond what you might be able to dig out of the fridge or cupboard.

Time is running out on TikTok, WeChat downloads on iPhones and Android phones