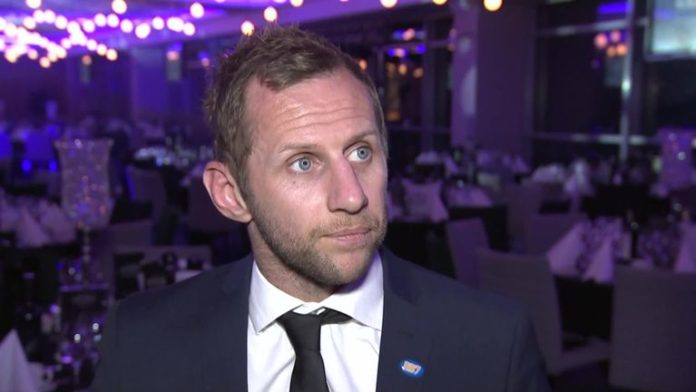 Leeds Rhinos legend Rob Burrow says he is overwhelmed by the support he has received at a fundraising dinner at Headingley, following his diagnosis with motor neurone disease.

Several big names from the sporting world, including England football manager Gareth Southgate and fellow Super League greats Kevin Sinfield and Jason Robinson were in attendance at the event.

The 37-year-old, who won 13 major honours during his 15-year playing career with the Rhinos, was diagnosed with the condition in December.

Speaking to Sky Sports News ahead of the event, Burrow said: “There are a lot of people here tonight for me and I’m overwhelmed by it all but I’m also quite nervous. I’m not used to being around sporting royalty like this.

“It’s hard to find words. I’ve been helped and supported by not only the rugby league community, but other sports as well.

“All you hear is bad news but the shining light in this is how many nice people are out there and want to help. I can never say how grateful I am.”

Earlier this month, Burrow attended the Super Bowl in Miami and former England forward Sam Burgess will take part in a long-distance bike trip to raise money for his old team-mate.

A fundraiser has been set up for Rob Burrow and his family, which has raised more £316,000. Click here if you’d like to donate to the cause.