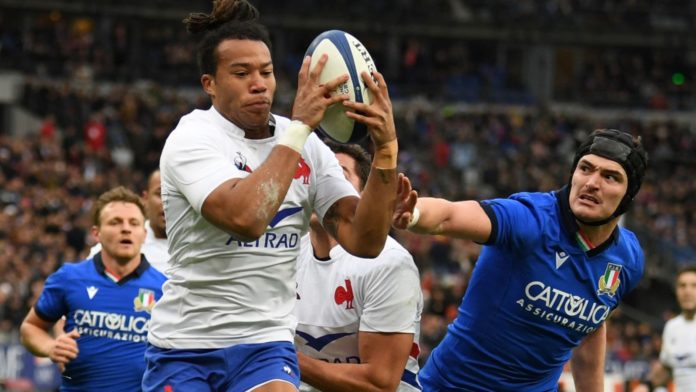 France followed up their impressive win over England with a mixed 35-22 win over a battling Italy on Sunday.

France looked set to run away with the game after scoring two early tries, but lost focus at crucial times, allowing Italy to creep back into the game.

Les Bleus managed to pull themselves together long enough to score three more tries and clinch the bonus-point win – but they will need to improve ahead of their trip to Cardiff to take on Wales in two weeks’ time.

It was a strong start from Les Blues who were 8-0 up after six minutes thanks to a penalty and a Teddy Thomas try – the winger getting onto the end of a beautifully weighted grubber from Ntamack.

Skipper Charles Ollivon scored their second after scrum-half Antoine Dupont showed pace and some patience resulting in the France skipper burrowing over.

Italy looked in danger of being ripped apart but showed patience of their own, going through 13 phases with winger Matteo Minozzi going over. Tommaso Allan added the conversion before adding a penalty to make it 13-10.

France scored their third just before half-time after Dupont sent a lovely skip pass out wide to No 8 Gregory Alldritt who cantered over. Ntamack bounced the conversion off both posts before finally getting it over giving France a healthy 23-10 lead at the break.

Some early Italy resistance in the second half put France under pressure but they grabbed their bonus point try on the 60th minute. From the lineout, Dupont and Thomas combined before releasing Ntamack who cut inside to score.

Les Bleus continued to frustrate by losing focus allowing Italy to get back into the game – they scored their second after a strong lineout drive saw replacement hooker Federico Zani grounding the ball against the post.

The conversion made it 28-17 but despite France continuing to make unforced errors and give away unnecessary penalties, Italy could not cut into their lead.

Replacement scrum-half Baptiste Serin did spark life back into France with a brilliant individual try late on. Taking a quick tap penalty, he cut through a tackle before racing onto his own grabber to score. Matthieu Jalibert converted.

Italy had the final say as winger Mattia Bellini went over after combing well with Jayden Hayward but the bonus-point win moves them to the top of the Six Nations table.

France showed moments of power, pace and some patience as well. The young side showed patches of maturity and their forwards were once again outstanding, dominating the collisions.

Italy could have let their heads go down after going down 13-0 but showed grit to get back into the game. Their set-piece had their moments and they looked dangerous with ball in hand.

For France, well they lost their focus and cannot afford to switch off for long periods of the game. Their lineout stuttered – especially in the second half and they made far too many mistakes. Discipline was also an issue for them and Ntamack will not be happy with his kicking stats after missing three conversions and a penalty.

A better showing from Italy after their nightmare against Wales but it’s still another loss – they have now lost 24 consecutive Six Nations games They gave away far too many penalties – especially in defence.