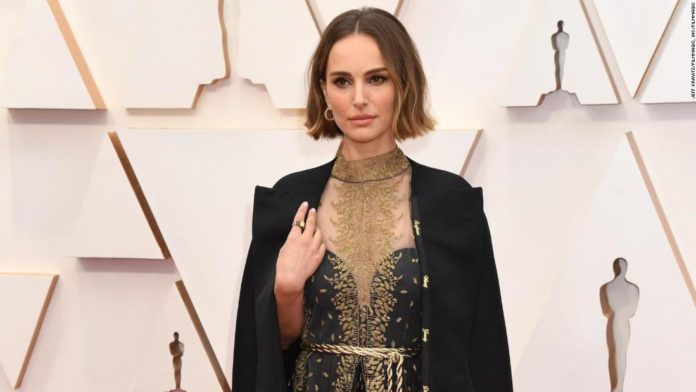 Natalie Portman and her red carpet attire aren’t going to let anyone forget about the lack of female directors nominated for Oscars this year.
Portman, on hand to present, sported a cape on the red carpet featuring the names of women who were overlooked this year in the directing category, including Greta Gerwig (“Little Women”), Lorene Scafaria (“Hustlers”) and Lulu Wang (“The Farewell”).
This year’s nominees in the directing category include Martin Scorsese (“The Irishman”), Todd Phillips (“Joker”), Sam Mendes (“1917”), Quentin Tarantino (“Once upon a Time… in Hollywood”) and Bong Joon Ho (“Parasite”).
This is not the first time Portman has called to attention the lack of female representation in the category. On the Oscars stage two years ago, Portman introduced the category saying, “…and here are the all-male nominees.”
Issa Rae also made a shade-filled comment when announcing the nominees in the category.
Last year, Gerwig became only the fifth woman nominated for best director. She also became the first woman to get a nod for her debut film, “Lady Bird.”
Kathryn Bigelow is the only woman to win best director in the 90-year history of the Academy Awards.

How the Pink Princess and the Pink Congo Scam Flourished Online

How the Pink Princess and the Pink Congo Scam Flourished Online

‘I do not feel unloved by opposition fans’