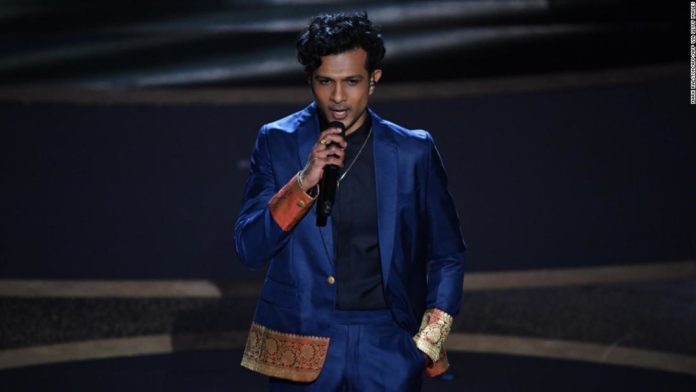 With no host this year, Ambudkar and his rapping skills stepped in to deliver a sort of halftime report that impressed many, especially those unfamiliar with the actor’s body of work.
His rap included nods to Brad Pitt’s win for best supporting actor, “Hair Love’s” success and several of the night’s performers.
His conclusion also got applause, as he declared: “Keep an open mind. I’m sure you’ll find that there’s plenty of light here for us all to shine.”
The line was a reference to the night’s lack of diverse nominees, a theme that was weaved throughout his rap.
Ambudkar is probably best known for his roles in “Pitch Perfect,” “The Mindy Project,’ and “Brittany Runs a Marathon.” But he got his start as part of Freestyle Love Supreme, an improvisational hip-hop group formed by Lin-Manuel Miranda, Thomas Kail and Anthony Veneziale. (Miranda also got a shout-out in Ambudkar’s musical recap.)
He also played Aaron Burr in some early readings of “Hamilton,” but never made it to the stage with the show.
Ambudkar eventually did make it to Broadway, though, in a limited-run stage show with Freestyle Love Supreme.
On Twitter, Ambudkar had a brief reaction to his big Oscars moment, tweeting a single word — “wow.”

‘It’s a girl!’ Harry and Meghan reveal happy news and speak of ‘fairytale’ life in US

Akhtar: ‘Gender investment gap’ in sport must be cut