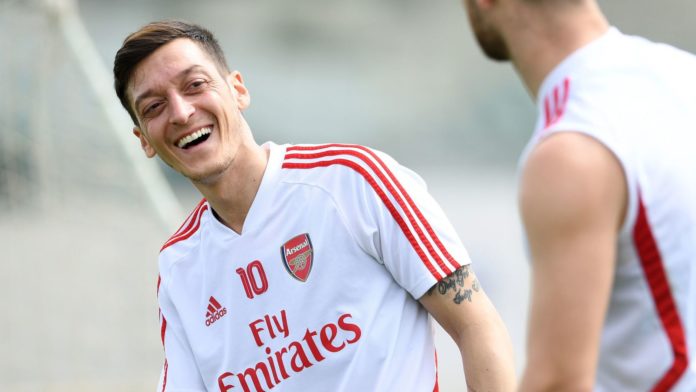 Mesut Ozil and Alexandre Lacazette have both backed Mikel Arteta’s tactical changes at Arsenal despite having only won three games since he took over.

Arteta took over from interim head coach Freddie Ljungberg in December and Arsenal are tenth in the Premier League after his first seven games in charge.

While the results have not improved significantly, Ozil and Lacazette feel the team has united under Arteta’s tactical philosophy.

Ozil, talking at Arsenal’s Dubai warm-weather training camp, said: “As a team, we are much happier and everyone wants to give everything for this club.

“Especially tactically we improve a lot and I hope in the future we will be more successful.”

Lacazette, who has not scored since Arteta took charge, echoed Ozil’s view on the coach and team morale.

“We are more together now. The way we think as well on the pitch and outside the pitch. Tactically we are better and we’re going to see a big improvement in the next few weeks.”

Hector Bellerin agreed about the changes being made by the former Arsenal captain since taking charge and the end of last year.

“It’s very early doors in time. [Mikel] has a new philosophy and the way he has implemented it in the last few games that we’ve played, there’s been a big change,” he told the club’s website.

“I think sometimes we need to be a bit more efficient in front of goal [but] that’s also something that comes with confidence, when you see that you’re playing better and controlling games better, the goals are something that’s going to come. I’m sure you’re going to see that very quickly.

“For us, the promise is that we’re trying to get better every single day. When a different coach comes, there are different things that you’re being asked to do.

Scottish Leagues One and Two to resume