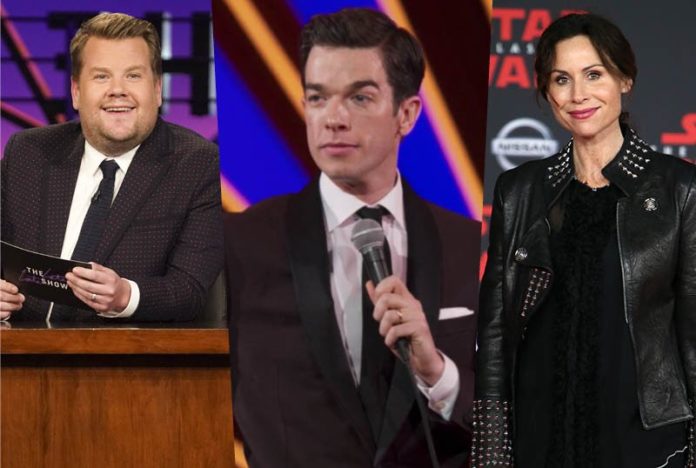 According to Deadline, Emmy-winning comedic actors James Corden (Peter Rabbit) and John Mulaney (Spider-Man: Into the Spider-Verse) along with Romesh Ranganathan (The Reluctant Landlord) have joined the cast of Sony Pictures’ upcoming reimagining of the classic fairytale Cinderella. The funny trio will be playing and lending their voices to the mice-turned-footmen sidekicks of the titular character, played by Grammy-nominee Camila Cabello.

In addition, Golden Globe winner Minnie Driver (Good Will Hunting, The Riches) has also signed on for the role of Queen Beatrice with five-time Grammy winner Missy Elliot currently in negotiations to portray the role of the Town Crier.

The musical film remake of Cinderella is said to be a modern re-imagining of the classic fairytale of the orphaned girl with an evil step-mother featuring a musical bent. Kay Cannon, who wrote the Pitch Perfect comedies, earned three Emmy nominations for NBC’s 30 Rock and directed last year’s comedy Blockers, will direct and write the film.

Joining Camila Cabello in her film acting debut as the titular princess are Emmy winner Billy Porter and Tony winner and Frozen star Idina Menzel, who is portraying the roles of fairy godmother and evil stepmother, respectively. The film will also feature Nicholas Galitzine (The Beat Beneath My Feet) as Prince Robert and Pierce Brosnan as the King along with Maddie Baillio and Charlott Spencer.

The idea for the project stems from an original idea from late-night talk show host James Corden, who will produce alongside his Fulwell 73 partner Leo Pearlman. The studio is putting the Cinderella film on the fast-track for production.

Production is expected to start this year in February for a February 5, 2021, theatrical release.

Cabello was originally a member of the girl group Fifth Harmony. After going solo, the singer’s single, Havana, hit #1 on the Hot 100, Billboard 200, and Artist 100 charts, as well as becoming the most-streamed song ever by a female artist on Spotify. The Cinderella project will serve as Cabello’s feature acting debut, and she will also be involved in the music for the movie.

China’s Covid success compared to Europe shows lockdowns are the first step, not a solution