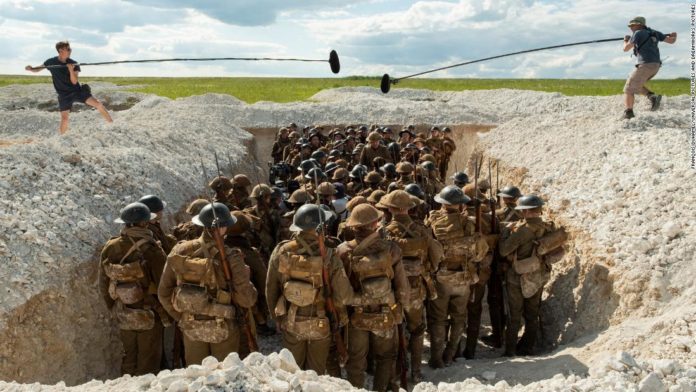 When Sam Mendes sent out the script for “1917,” his concept was firmly in place: a feature-length war film envisioned as a single shot in real time. It was bold. It was ambitious. It was maybe not taken as seriously as he hoped.

“I did laugh out loud,” remembered editor Lee Smith. “I thought it was a typo,” said cinematographer Roger Deakins, chuckling, before backtracking. “No, my reaction was, ‘Okay. Why?’ But then I read it and it’s obvious.”

“1917” is a simple story complex in its storytelling. Mendes’ film — inspired by tales told by his grandfather, a messenger in World War I — tracks two British soldiers on a mission through No Man’s Land to deliver instructions to advancing troops in mortal peril. Failure isn’t an option, and the urgency of the situation demands that we follow them every step of the way. So that’s what the camera does.

“One-shot” filmmaking follows no fixed path, and directors before Mendes have approached it with varying degrees of fidelity. In Hitchock’s “Rope” (1948), cuts were masked by panning across characters’ dark clothing. Cinematographer Emmanuel Lubezki also obscured the frame to hide edits in Alexander Iñárritu’s “Birdman” (2014), panning to walls and objects or plunging into the shadows of New York alleyways, building on the illusion with dynamic handheld shots.

A still from Sebastian Schipper’s “Victoria” (2015), shot in one unbroken take in the early hours of the morning in Berlin. Credit: courtesy Mongrel Media

True one-shot “Victoria” (2015) had Sebastian Schipper direct a bank heist around the streets of Berlin, his cast ad-libbing dialogue while the camera was passed between operators. Schipper filmed three takes and his favorite ended up on screen (and had the grace to bill cinematographer Sturla Brandth Grøvlen above him in the credits).

“1917,” with its high-octane action, large cast and ever-changing mis-en-scene, opted to stitch together takes up to nine minutes long — and yes, though marketed as a one-shot film, “1917” does contain a single visible cut. Scale models of production designer Dennis Gassner’s sets, built on a backlot at Shepperton Studios and on location up and down the UK, were used to choreograph performances and camera movements ahead of time, and on set rehearsed and rehearsed again.

Deakins, who shot digitally, convinced ARRI to provide three prototype miniature large format Alexa cameras, ideal for their portability. “I don’t use technology for the sake of it, but it often demands it,” he said. “A film like this comes up, and then there’s bits of technology that are just suited to it.”

More than half of the film was shot on an electronically-stabilized, remote-controlled head called a Stabileye (“I can’t understand how it works, but it’s very small and it’s fantastic,” Deakins said). The crew invented a gyro post for Steadicam operator Peter Cavaciuti so he could run forward down trenches with the camera facing backwards, while a Trinity rig — a type of hybrid camera stabilizer — was used extensively.

With only one spare camera, equipment was put through the wringer. “Pete and Charlie Rizek, who (operated) a Trinity, each of them fell over a couple of times in the trenches,” said the cinematographer. Cameras were attached to and removed from wires, taken for a rides on a motorbike and 4x4s, and on a drone over water at one stage.

The majority of “1917” was filmed on location up and down the UK, standing in for the Western Front. Credit: François Duhamel/Universal Pictures and DreamWorks Pictures

In a break from Deakins’ regular workflow, he was often controlling cameras remotely from a van alongside select crew. “We were laughing a lot, but it was very tense when we were doing a shot,” he said. “You can’t go back. You either get the take or you have to start again.”

The preceding shot would be played back, and Mendes wouldn’t entertain a rehearsal of the following take until the next shot had been matched up perfectly, Deakins explained. “We were trying to make and complete the film as we were shooting,” said Smith. “It was kind of (like) standing there butt-naked. All of my usual armor was stripped away.”

“If there were any issues, I had to speak up quickly,” added Smith, who edited remotely. “If you were watching the dailies, for example, and you said that you needed to cut, you had a big problem.” Was there ever a contingency plan if a bad match was discovered in post-production? “Other than suicide, no,” Deakins quipped.

Essential to maintaining continuity was lighting — made trickier by large sections of open-air filming. Deakins, a master of light and shadow, exchanged his usual range for flat and overcast conditions. However, being the person making the call on whether to roll or not “added a level of anxiety I don’t want to go through again,” he said.

“Most of the time I said no, because I didn’t want to be in a situation where you’re shooting a shot and the actors are giving it their all and suddenly the sun comes out. So that I found very stressful.”

The cinematographer did have an opportunity to play with low lighting and silhouettes during a stunning nighttime sequence of fire and rubble that conjures memories of his third act in “Skyfall,” as well as “Ivan’s Childhood” by Andrei Tarkovsky (a “staggering” film and “the closest anything is to art — pure art,” Deakins argued).

“I felt it could be more of a slight dreamscape,” he explained, “a vision of hell” — albeit meticulously designed and tested down to the time it took for flares to fall from the air. Yet there was still room for happy accidents elsewhere, Deakins added, although it would be best not to spoil the surprise.

George MacKay as Schofield in a still from “1917.” Credit: Universal Pictures and DreamWorks Pictures

The completed film, releasing in the US on Christmas Day and internationally in January, has thrust Deakins and Smith’s names into awards season contention. However, both recent Academy Award winners are modest men.

Deakins said he’s still surprised by which of his films turn in to a hit or not. One of the greatest cinematographers in the world today said he sometimes stumbles across his work while late night channel hopping, “and I’ll watch it and think, ‘Oh, that’s not bad.'” It would almost be indecent to ask if he foresees a second Oscar.

Smith, meanwhile, is content to be the film’s “Invisible Man.” “You’d have to really have a huge understanding of editing, or you would have had to have edited this kind of a film to understand what goes into it,” he said. “(Voters would) probably just watch it and go, ‘Well, there’s no editing in this movie.’ And that’s fine… That just means I did my job properly.”

As for what’s next, Smith is taking a break while Deakins is on the hunt for his next challenge. “If you hear of anything,” he said, “let me know.”