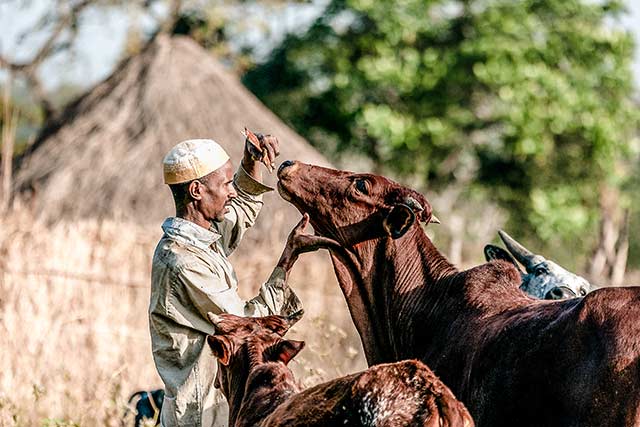 Transhumance in the Sahel region is characterized by ancestral practices, and represents socio-cultural and economic exchanges between populations of bordering countries. However, recurrent shocks, such as the effects of climate change, and increased demographic pressure on natural resources, adversely affect agropastoral activities.

In Chad, pastoralists usually migrate to the Central African Republic during the dry season; however, these movements are disrupted by increased insecurity and recurrent drought, which push transhumant populations further into the country in search of pasture and water for their livestock. The Central African Republic, meanwhile, is still affected by the crisis and violence perpetrated by armed groups. As a result, these factors exacerbate tensions between farmers and pastoralists in border areas and hamper the effective management of cross-border transhumance.

FAO’s project entitled “Restoration of peace and dialogue between communities affected by cross-border transhumance in the Central African Republic and Chad”, funded by the United Nations Peacebuilding Fund, started in December 2018 and will end at the end June 2020. The project objective is to strengthen the dialogue between the two countries for better management of transhumance and to regulate movements. The intervention thus seeks to contribute to stabilization efforts through activities focused, in particular, on training dialogue committees, mapping transhumance corridors and rehabilitating pastoral infrastructure.

Since the start of the project, FAO together with the International Organization for Migration have conducted the following activities: carried out data collection in the prefectures of Nana Gribizi and Bamingui-Bangoran in the Central African Republic; conducted an analysis of the factors triggering conflict linked to transhumance, with the identification of prevention and risk management mechanisms; developed maps of transhumance sites in Chad; and trained and conducted awareness sessions for local authorities and community leaders.

Within the framework of the project, FAO successfully organized the first bilateral meeting between Chad and the Central African Republic on challenges related to transhumance. The meeting took place in N’Djamena from 4 to 6 December 2019 and represents an important step towards strengthening the inter-institutional dialogue between the two countries. For three days, the main actors met to discuss the measures to be put in place for effective border management.

In conclusion, recommendations were defined and stakeholders agreed to jointly regulate cross-border movements between the Central African Republic, Chad and Cameroon, laying the foundations for stronger commitment by governments, and technical and financial partners, in the effort to restore peace in the sub-region. The project will continue to build on its results in the long-term, and to strengthen the livelihoods and resilience of pastoral communities.

In 2020, FAO will implement essential livelihood activities, such as the rehabilitation of pastoral infrastructure, the vaccination and deworming of 100 000 heads of cattle, training of beneficiaries in conflict management, as well as income-generating activities for young people and women. The project will contribute to the sustainability of the dialogue between the two countries and put in place the appropriate mechanisms to manage transhumance, benefiting pastoral communities.

South Sudan: Facts and figures for 2019

Hunger threatens over half of the population in South Sudan

Caught between a comic-book tone and Holocaust horrors, ‘Hunters’ struggles to...

How to Master the Delicate Art of Becoming a ‘Gold Chain...