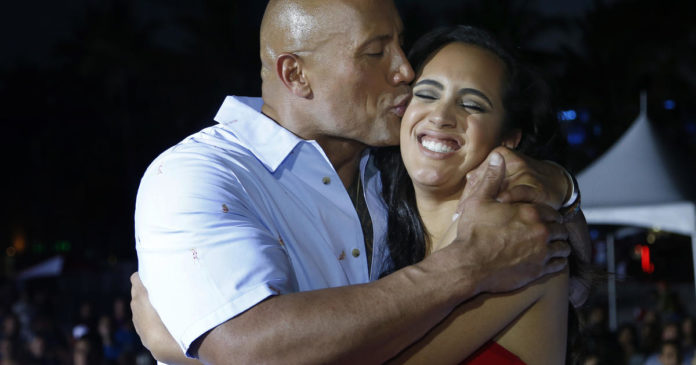 Wrestling pro-turned-Hollywood star Dwayne “The Rock” Johnson, can now add father of a budding “WWE superstar” to his stellar resume.

The Rock’s daughter Simone has officially signed a wrestling contract with WWE to follow in the footsteps of not only her father, but her grandfather and great-grandfather.

“It means the world to me,” Simone Johnson said in a statement. “To know that my family has such a personal connection to wrestling is really special to me and I feel grateful to have the opportunity, not only to wrestle, but to carry on that legacy.”

WWE made the announcement on Monday, and said the 18-year-old is “on a path to become the first fourth-generation Superstar in WWE history.”

Simone certainly has some big boots to fill as she begins her training at the WWE Performance Center in Orlando. Her grandfather, Rocky “Soul Man” Johnson, and great-grandfather, Peter Maivia, were both WWE Hall-of-Famers, and of course her father is also a legend in the sport.

“Simone Johnson’s unbridled passion and incredible drive has earned her a coveted spot training with the elite athletes from around the world,” said WWE Executive Vice President Paul Levesque. “She’ll carry on the tradition of her incredible family lineage while creating her own impact as WWE’s first fourth generation Superstar.”

Following the announcement, Simone shared the news on Instagram. “To the little girl who fell in love with wrestling & said ‘this will be my life one day’, this is for you,” she wrote. “I’m humbled, grateful & ready to work. Let’s do this.”

The Rock also took to Instagram to share his delight. “Congrats to my #1 born, Simone Johnson on officially signing her wrestling contract with @wwe @wwenxt and on her way to becoming the first ever 4th generation WWE athlete,” he wrote. “Carry our family name proudly, but your road will always be yours to create, earn & own.”

“While the legacy of the family may be your platform, your future will be uniquely yours to earn,”  Simone’s mom, Dany Garcia, added.

Last month, Dwayne’s father Rocky Johnson passed away at the age of 75.