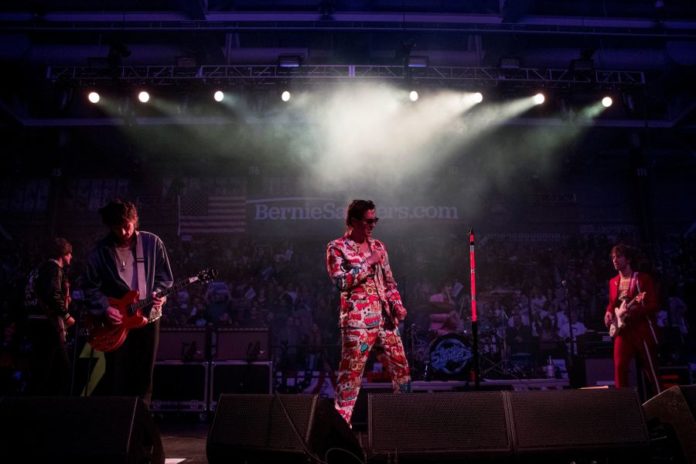 The riotous peak of the Strokes’ get-out-the-vote concert rally with Bernie Sanders on Monday night came at the very end, when the opening notes of “New York City Cops” ripped through the Whittemore Center Arena in Durham, New Hampshire. Within seconds, fans were storming the college hockey arena’s stage, and a few New Hampshire cops were trying in vain to shut it all down as Julian Casablancas howled about their big-city colleagues: “They ain’t too smaaaaaaaaart!”

“My head’s spinning a little,” Casablancas tells RS after the show, relaxing backstage in sneakers and a promotional T-shirt for Spike Lee’s Do the Right Thing. The decision to play that protest/party-rock song — famously excluded from the U.S. release of the Strokes’ classic 2001 debut for political reasons — was a spur-of-the-moment choice as the venue’s curfew arrived: “It was not on our set list,” the singer adds. “The cops had turned the lights on, so we were like, ‘Let’s just play “New York City Cops,” then, as a farewell.’ One of them grabbed my arm. I was like, ‘Oh, damn, am I about to get arrested right now?’”

How to Fix Democrats’ Busted Primary 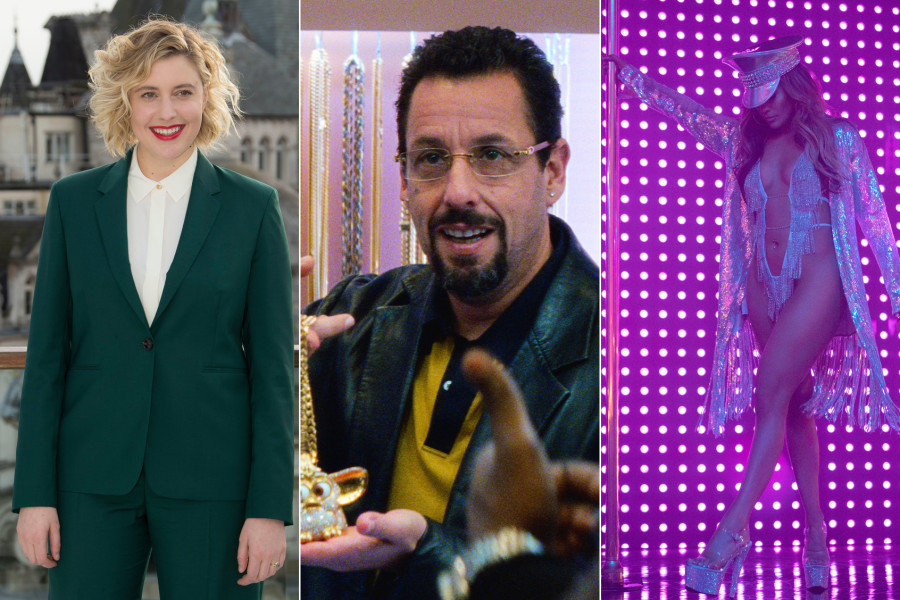 ‘Let It Bleed’: Why the Stones’ Nastiest Masterpiece Feels Right on Time

With New Hampshire’s primary vote taking place Tuesday — and recent state polls showing the Vermont senator in a close race with former South Bend, Indiana, mayor Pete Buttigieg — the Sanders campaign pulled out all the stops for Monday night’s “Bernie Beats Trump” rally. The lineup at the University of New Hampshire was a veritable Lollapalooza of the left, with a crowd of about 7,500 on hand for stirring stump speeches from Cornel West, Nina Turner, Cynthia Nixon, Rep. Alexandria Ocasio-Cortez, and Sanders himself in between performances by the Strokes and Sunflower Bean.

The Strokes were more than happy to offer their services when the Sanders campaign reached out about a concert for the cause last month. “How can you say no?” asks Casablancas. “He’s the only noncorporate candidate, so by default, he’s the only person who you can trust what he’s saying.”

The fact that the Strokes were preparing to announce their first album in seven years, the Rick Rubin-produced The New Abnormal, on Tuesday was just another reason to get on board. “It’s not about trying to sell records,” Casablancas says. “Whatever energy an announcement can give, [we wanted] to get that attention to Bernie. That’s way more important. We would do probably anything he asked.”

By 5 p.m. on Monday, the frosty concrete outside the Whittemore Center Arena was packed with people waiting for the show. One grey-haired gent in a parka was explaining Hannah Arendt and the fate of empires to a new friend; another was hawking off-brand Bernie buttons to people in line.

Most of the crowd, though, was made up of young people, like Alex, 23, a Rochester, New Hampshire, resident in a pink beanie who liked Sanders’ positions on ending student debt and legalizing marijuana. “And he seems like someone who’s actually a human being, not a parasite,” Alex added. “So that’s pretty cool.”

Jake Boynton, 32, a musician from Needham, Massachusetts, said he’d volunteered to help the Sanders campaign connect with other local acts. “He speaks to regular people,” Boynton said, citing the senator’s support for universal health care and getting money out of politics. “There’s a lack of protest music in modern times, but artists like to get behind revolutions.”

Inside the venue, a brisk business was going in limited-edition Bernie/Strokes t-shirts — a great deal at just $27, as long as you sign the Federal Elections Commission disclosure form — and other assorted campaign merch.

Sunflower Bean opened the show around 7 p.m. with a blast of elemental glam-rock excitement. The highlight of their set was a cover of the Who’s “My Generation,” remaking the song’s nihilistic snarl as a statement of defiant optimism, with the kids up front moshing for the promise of the future.

The musicians in the New York band, all aged 24, are ardent Bernie supporters. When the call came for them to help him get out the vote in New Hampshire, they canceled all other plans and got in the van. The night before the Strokes show, they got to meet Sanders after playing another rally with him in Keene, New Hampshire. “He thanked us for playing, and we thanked him for doing what he’s doing,” says lead guitarist Nick Kivlen. “He’s so brave. He’s taking on every position of power to do this for the working people of this country.”

“There’s a common thread between truth in art and truth in politics, that people are starved for,” agrees drummer Jacob Faber. “Bernie is the realest candidate.”

Back onstage, the speakers argued forcefully for Bernie’s vision of democratic socialism. Nina Turner delivered a fiery riff on Franklin Delano Roosevelt’s 1936 “We welcome their hatred” speech. Cynthia Nixon drew boos when she said she’d supported Hillary Clinton in 2016 — “Oh no, we’re not gonna do that here,” she admonished the crowd — that turned into cheers as she described her dream of a better tomorrow in Bernie’s America. Cornel West, master crowd-mover, got some of the night’s loudest applause as he preached the value of human life from Tel Aviv to Gaza to New England.

Each of these speakers used their ample rhetorical gifts to make the case that a fairer society is not just possible but necessary — and that Bernie is the only candidate who can get us there. “Progressive ideals are in vogue,” crowed Rep. Ocasio-Cortez. “Who put them in vogue?” The answer, of course, was Bernie. “We’re not going back,” she said. “We’re going forward.” The crowd roared.

Ocasio-Cortez was the night’s clearest star outside of Bernie and the Strokes, her adroit, persuasive, sharply intelligent speech a reminder of why some see her as a potential presidential candidate a few years down the road. (Casablancas is one of them: “I mean, I would definitely vote for her, but I’m an East Coast-biased, New York-biased, coastal elite,” he tells RS.)

Sanders took the stage a little after 8:30 p.m., surrounded by his family and the idealistic mantra of John Lennon’s “Power to the People.” He’s been campaigning hard in recent weeks, but he seemed blessed and unstressed in New Hampshire, expertly leading the crowd through his greatest hits. He denounced Trump as a pathological liar, a bully, a racist, a sexist, a xenophobe, a homophobe, “the most dangerous president in modern American history.” He got big boos for Amazon’s nonexistent tax bill and equally big cheeers for canceling all student debt.

Sanders spoke in clear moral terms that cut through the Washington double-speak his supporters have been hearing all their lives: “It’s time for Wall Street to help the working class of this country.” “Our administration will believe in science.” “It is women who must control their own bodies, not the government, end of discussion.” Huge applause followed each iron-clad declaration.

At last, the night’s musical headliners were onstage. The Strokes raced through an energetic set that began with a cover of Talking Heads’ “Burning Down the House,” spun through a couple of songs from their new album, and hit maximum velocity each time they played an old favorite from their first album. “Someday” had the same winning combination of world-weary regret and youthful insouciance that it had 19 years ago, getting a crowd response as enthusiastic as anything besides Medicare for All.

As the older campaign volunteers went home, the crowd’s energy intensified. By “Hard to Explain,” they were so rowdy that Sanders campaign workers had to hurriedly remove the metal barricades in front of the stage before anyone got hurt.

The stands had substantially thinned out by the time the Strokes debuted their new song “At the Door,” a languid, droning electro lament accompanied by a trippy video, and announced their new album’s April 10th release date. But the true believers up front weren’t done for the night yet.

“New York City Cops” brought the show to an appropriately exuberant, populist close. Casablancas was not, in fact, arrested for this act of musical disobedience. As the song crashed to its halt and the band left the stage, the fans were smiling.

It was a Strokes show like no other — a much smaller room than the festivals and major-league arenas they normally haunt, but one with much more wild, anarchic energy. “It was strange,” Casablancas tells me afterward. “Like a Sixties show. It reminded me of movies about the Doors or something.”

He sounds tired from the show, but energized for what’s to come. “People believe what he’s saying,” he says of his chosen candidate. “They feel like he’s honest, and that’s so different and refreshing… You need revolutionary change right now. People sense that. And Bernie’s the only one going there.”

‘Some victims may never recover’: Long-term effects of COVID-19 could be...