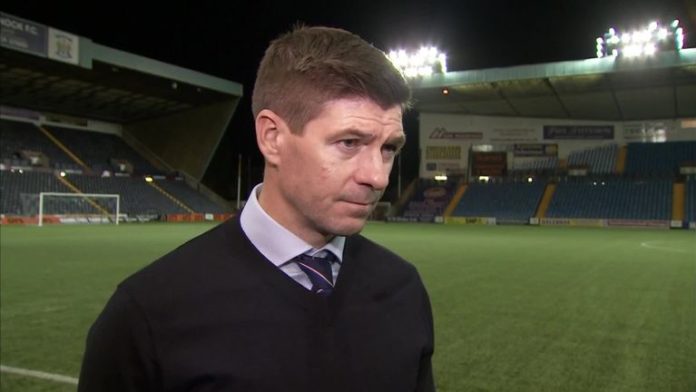 Rangers slumped to defeat at Kilmarnock to fall 10 points behind Celtic; Neil Lennon plays down significance of Celtic’s 5-0 win over Hearts

Steven Gerrard fears Celtic are closing in on a ninth successive title after saying his Rangers side “never handled the heat” at Kilmarnock.

Rangers started the year looking to use December’s Celtic Park victory as a springboard to a run at the title. But barely six weeks later it appears all hope is gone after a 2-1 defeat to Kilmarnock saw Rangers slip 10 points behind their bitter rivals.

Gers still have a game in hand and two Old Firm derbies to turn the situation around but Gerrard confessed his team have failed to handle the pressure.

Rangers grabbed a first-half lead through a Scott Arfield rocket but, just like last season when the wheels came off at Rugby Park after the winter break, they surrendered the points with a poor second-half display as goals from Stephen O’Donnell and Eamonn Brophy sealed Killie’s win.

“The reality is the opposition [Celtic] are in the driving seat. That’s down to two things – their form and us not being good enough since the winter break.

“But I’m responsible for that. I put this group together. I coach them, they are my tactics and decisions. So I’m not going to sit here and try and force any blame in any other direction than myself.

“It’s disappointing, it’s frustrating at the moment. We keep going, we keep fighting and see where we are. But on the evidence of the second half tonight, it’s very worrying for me right now.”

Gerrard admitted his team would face questions over their bottle after losing to Hearts last month and his view has not changed.

He said: “On the evidence of the second half, yes. We came here tonight and it was a pressure game in a stadium where you know you are going to be under the cosh or under the heat. The reality is that we couldn’t cope tonight.

“I had every belief and confidence when I reflected on the first six months of the season that I had enough to put at least a stronger fight up at this stage. But at the moment it’s looking extremely tough.

“The last four or five weeks – or how many weeks it is since we came back – the consistency seems to have disappeared, which is a worry.”

Celtic ‘not taking anything for granted’

Neil Lennon played down the significance of Celtic’s 5-0 win over Hearts which took the Hoops 10 points clear of Rangers at the top of the Ladbrokes Premiership.

Olivier Ntcham opened the scoring for the home side on the half-hour mark with a drive, with second-half goals from Christopher Jullien, Callum McGregor, Ryan Christie and Jozo Simunovic completing the trouncing.

“It might give them a bit of confidence but that’s about it,” said Celtic boss Lennon. “We have a tough game on Sunday at Pittodrie. We are taking absolutely nothing for granted.

“The players know there is a long way to go and there will be twist and turns as we go along. We just need to concentrate on every individual game as it comes along. They were magnificent tonight.

“Their desire, hunger to play, score goals, run; everything you want from a team I got tonight. It was an emphatic victory.”