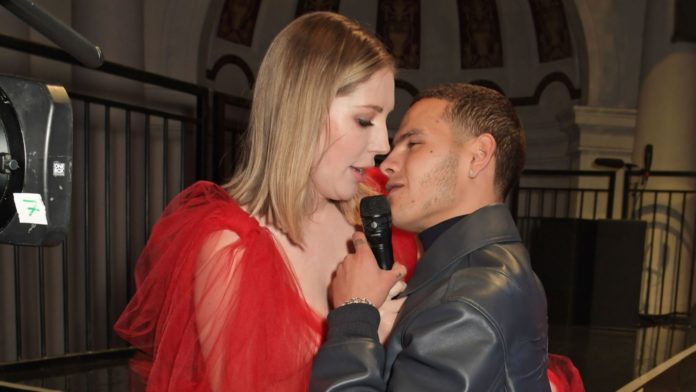 Slowthai has caused controversy after confronting a member of the audience at the NME awards.

The British rapper had been giving an acceptance speech when a spectator’s comment appeared to anger him.

He threw his drink into the crowd before jumping down to argue with the person before being restrained by security.

Earlier in the ceremony Slowthai had asked host, comedian Katherine Ryan, to smell his cologne and referred to her as “baby girl”.

As he left the stage, Ryan joked “thank you Mike from Love Island” – adding that he is “younger than my babysitter”.

Later she tweeted: “He didn’t make me uncomfortable. This is why we need women in positions of power.

“I knew he had lost from the moment he opened his mouth like any heckler coming up against a COMIC – not a woman – a COMIC. I was operating 2/10. What a sweet boy. I defused it. Tonight was fun!”

Aside from the altercation, it was a good night for Slowthai. He won the “hero of the year” award, as well as best collaboration for his work with Mura Masa.

Slowthai hit the headlines in September when he held up an effigy of Boris Johnson’s severed head at the Mercury Prize ceremony.

After stripping to the waist during an energetic rendition of his track Doorman, the rapper grabbed the fake head from the floor and held it aloft, shouting: “F*** Boris Johnson. F*** everything.”

At the time, Mr Johnson had laughed it off, saying the rapper had actually said “back Boris” but was let down by the acoustics.

Other winners included Taylor Swift, who picked up the award for best solo act.

Swift described the awards show as “the craziest… I have ever been to”.

The best album in the world award went to Lana Del Rey’s Norman F****** Rockwell, while best song in the world went to Billie Eilish for Bad Guy.

Best British solo artist went to FKA Twigs and best British band was The 1975, while US heavy metal band Slipknot won the best band in the world gong.

‘The Mandalorian’ powers up with a polished second-season launch

Jeff Bridges gives update in his battle with cancer