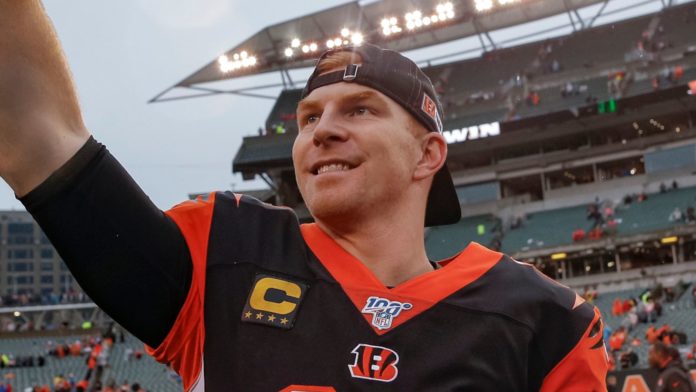 Bengals want to avoid moving Dalton to “a bad spot”

The Cincinnati Bengals intend to find quarterback Andy Dalton a new team in the off-season as they prepare to select Heisman Trophy winner Joe Burrow with the No 1 pick in the NFL draft, according to reports.

After nine years with the Bengals, Dalton will be traded “when the time is right”, say the NFL Network.

The Bengals, who were an NFL-worst 2-14 last season, are expected to select Ohio native Burrow after he led LSU to the national championship in his final college season.

Burrow or not, Cincinnati apparently plan to reboot at quarterback but want to avoid moving Dalton to “a bad spot” out of respect for the nine years Dalton spent with the organisation.

Dalton, 32, won the starting job in Cincinnati as a rookie out of TCU after being drafted early in the second round in 2011.

Paired with talented wide receiver AJ Green, the fourth overall pick in the same draft, Dalton made the Pro Bowl in his debut season, when he led Cincinnati to the playoffs.

It would be one of three Pro Bowl berths and four straight postseason trips for Dalton, who went 50-26-1 as a starter in his first five seasons.

Dalton and the Bengals never won a playoff game together, going 0-4 in four AFC wild-card losses. The team hasn’t had a winning record since 2015, going 20-35-1 since then with Dalton under center.

The Dalton era appeared over when he was benched shortly before the 2019 trade deadline, with the 0-8 Bengals giving fourth-round rookie Ryan Finley three starts. But after a trio of ugly losses, head coach Zac Taylor went back to Dalton, who led the Bengals to their only two wins of the season in his final five starts.