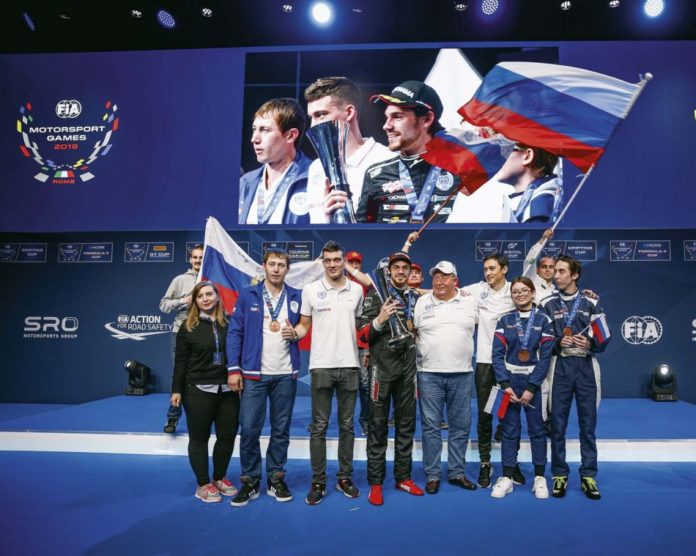 Following the success of the inaugural FIA Motorsport Games in Vallelunga last November, AUTO looks at what the event means for the Federation and its member sporting organisations, and at how the gathering of nations is set to expand in the coming years

At its top levels motor sport’s focus often narrows to the tightest of apertures, homing in on the individual and defining the pursuit of success as a singular effort in a rarefied arena where only the fittest survive and prosper. That characterisation, though, forms but a detail of a far bigger picture that at its widest encompasses a huge range of disciplines from karting to single-seaters, touring cars and GT machines, and from entrylevel to the cusp of racing’s elite categories. The rise to those dizzy heights also takes in a vast array of competitions organised and run by the national sporting organisations that make up the members of the FIA’s sporting pillar.

It’s that enormous motor sport culture that the Federation has sought to celebrate and honour with the inaugural FIA Motorsport Games.

Designed as an annual gathering of motor sport’s clans under national colours, the Games were born out of 2018’s FIA GT Nations Cup, held at the Bahrain International Circuit. The unique selling point of the Bahrain competition was its national focus and its promotion of top amateur talent. Bringing together the world’s finest non-professional drivers to race for their respective country generated strong interest, from media and sports organisations but also from governments.

The logical extension of the concept was to broaden the event’s scope beyond GT racing and in June 2019 the Federation announced the launch of the Motorsport Games, to be held in November in the first host city, Rome. Building on the Nations Cup the Games would additionally feature Formula 4, Touring Cars, Drifting, Karting Slalom and Digital Motorsport.

With the six gold medals on offer divided among six different National Sporting Authorities, and with 13 ASNs awarded gold, silver, or bronze, the inaugural FIA Motorsport Games was judged to be an unqualified success.

The first winner of the Motorsport Games was Russia, which secured gold in the Touring Car Cup with Klim Gavrilov. Adding to the bronze medals already claimed for the Karting Slalom Cup and Drifting Cup took Russia to the top of the table. Host Italy and Australia were tied on a gold and a bronze apiece, with Italy eventually taking second after a tie-breaker.

“What does it mean for our ASN and Russia in general? Pride, progress and, of course, satisfaction. Because we met our goal, we got the result – victory. What does it mean for Russian team drivers? Great motivation for the future. It’s a great platform upon which to set new goals, from which to find new levels of performance and self-development.”

While there is no denying the honour in returning home from the Games with a clutch of medals, the global exposure afforded by the event affects not only those taking part, but also the wider Federation, explains FIA Deputy President for Sport Graham Stoker.

“Our premier championships are strongly promoted and are hugely popular on TV, but this new event showcases upcoming amateur talent and that’s important for the strength of our national sporting organisations,” he says. “These competitors are active at a national level with our ASNs, but the Motorsport Games gives them the opportunity to take part in a high-profile international event where they can represent their country and win medals. This hasn’t happened before and brings global attention to the depth of talent that exists within our sport. This is an exciting development and, based on the success this inaugural edition, there is huge potential to showcase the skills of some exceptional sportsmen and women.”

Such was the positivity surrounding the inaugural Games that according to Stoker, in the aftermath of the event he received an approach from an ASN interested in taking part in the next edition. “In the wake of the Games I spoke to a number of our Caribbean ASNs in Panama City and they would like to enter their own National Motorsport Team in the next event. This demonstrates how we are shining the spotlight on a part of our sport that is so important through the FIA Motorsport Games. Strong amateur motor sport is our ‘life’s blood’ and the Games celebrates that.”

The inaugural Games was also noteworthy for its inclusive spirit, with women comprising around 20 per cent of all athletes. Four of the six disciplines featured female representation, with the karting slalom including teams of mixed pairs.

The Netherlands took gold in that event with FIA Girls on Track Karting Challenge finalist Nina Pothof and team-mate Bastiaan van Loenen clinching the top spot, while neighbours Belgium secured silver thanks to Manon Degotte and Antoine Morlet. Rounding off the podium were Team Russia’s Olesia Vashchuk and Vladislav Bushuev.

The success of the Games was most apparent in the number of countries represented on the stage of the Congress Centre Vallelunga during the awards ceremony. While Russia was crowned overall winner and Australia and Italy shared second place, the Netherlands, Japan and Ukraine – which won a single gold medal each – were third.

Building on the success of the inaugural Games is already high on the FIA’s agenda, with additional disciplines under consideration for inclusion.

“There is a real opportunity to grow the event by involving the majority of our 145 ASNs worldwide and through the participation of many more competitors,” says Stoker. “We can build on this first event to establish the Games as a high-profile arena in which the very best emerging talents from all over the world can show off their abilities. There is great potential to introduce other disciplines such as rallying, rallycross, karting and Cross Kart to reveal the great breadth of our sport and the exceptional talents participating week-in, week-out at events globally. That is worthy of celebration and the Games are a fitting tribute to this talent and to the national sporting organisations that make their success possible.”

See the moment a powerful earthquake rocked a city in Turkey