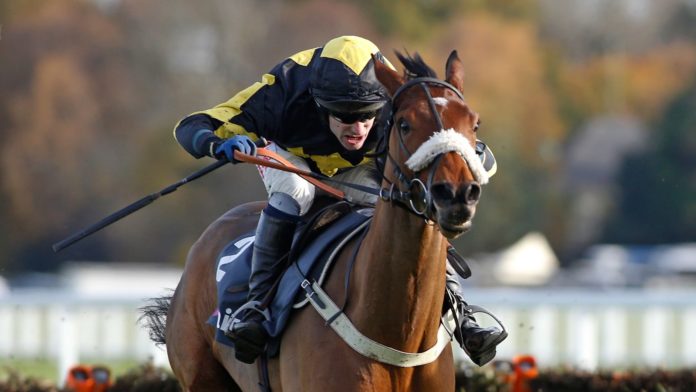 Elegant Escape heads a field of 11 runners declared for the Unibet Grand National Trial at Haydock.

Colin Tizzard’s charge has failed to get his head in front since landing the 2018 Welsh Grand National, but has contested some top-class races – including the Cheltenham Gold Cup.

He could only finish sixth when defending his crown at Chepstow in late December, but is nevertheless a leading contender for Saturday’s three-and-a-half-mile feature on Merseyside.

Paul Nicholls relies on Yala Enki, who claimed this prize two years ago when trained by Venetia Williams. The Ditcheat maestro has not declared ante-post favourite Truckers Lodge.

Lord Du Mesnil bids for a fourth consecutive win for Richard Hobson, while Lucinda Russell’s 2017 Grand National hero One For Arthur warms up for another tilt at the Aintree spectacular.

The latter was little more than seven lengths behind Vintage Clouds when third in the Peter Marsh four weeks ago.

Thomson said: “It’s a shame Elegant Escape runs, because that leaves us on 10 stone – which means Ryan (Mania) can’t ride him. We’ve booked Sean Quinlan to ride instead.

“We were delighted with his run in the Peter Marsh. I know he’s a nine-year-old, but that was only his seventh run over fences, so he is still inexperienced.

“We could have waited for the Eider at Newcastle next week. But the weights for that could go up, and we decided we’d let him take his chance on Saturday on a low weight.

“He handles heavy ground; the trip will suit him, and he likes Haydock, so he has plenty in his favour.”