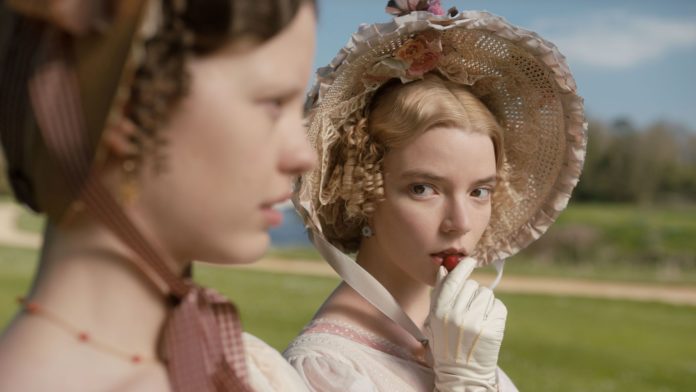 Bill Nighy has told Sky News he had “rich pickings” when it came to his latest role, as the titular heroine’s father Mr Woodhouse in the new film adaptation of Emma.

The 70-year-old is the comedic heart of the film, as his character obsesses over catching colds and bad weather.

The actor said those tendencies gave him something to work with.

“That’s kind of funny already,” Nighy said. “People who are control freaks, if you observe them from a distance, as long as they don’t move in next door or something, are kind of funny.”

“And even one’s own control issues, because I don’t think many of us are exempt, can be, at some point, amusing.”

He said it’s the stereotype associated with some men in this country that he wanted to explore.

“I like the idea of uptight Englishmen,” Nighy said. “I mean, I’m sure there’s uptight Spanish, French, German, Japanese, all kinds of uptight people.

“But I do think that it’s associated with England and a sort of a degree of uptightness, but that can be rich pickings for, you know, appearing daft.”

This new adaptation of Jane Austen’s novel, which stars Anya Taylor-Joy as Emma, is a first feature for its director, rock photographer Autumn de Wilde.

Nighy, who doesn’t do many period dramas, said the filmmaker was one of the draws.

“But it’s not really that I avoid them, it’s just that they don’t really come my way, I don’t think I’m associated with that kind of work.”

“The reason I’m in this one is because I met Autumn de Wilde, who directed it, who is a very extraordinary person, and I’ve never met anyone quite like her.”

Nighy works a lot, not just in film, but also on television and on stage.

He said when he receives a script he can usually tell if a project is for him.

“All you have to go on really is the script, and I’m reasonably okay at judging the quality of something,” he said.

“I’m not terribly good at then imagining how it’s all going to work out, but in terms of the writing, I think I can judge it.

“And then you get to who else is in it or who’s directing it or where is it – I mean, where is it doesn’t actually matter at all – but largely it’s to do with the script.”

But while Nighy can be confident about his next project, it’s when he looks back that he may run into trouble.

“I’m not very self-aware and I can’t remember anything,” he said.

“That’s my other problem, as my father used to say: ‘I wish I had a memory’.

“And I used to think, how can you not have a memory? Turns out it’s quite simple – you just get born like that.”

Emma is out in cinemas in the UK on 14 February

‘The Mandalorian’ powers up with a polished second-season launch

Jeff Bridges gives update in his battle with cancer