Home Sport McLaren: What next in their F1 revival? 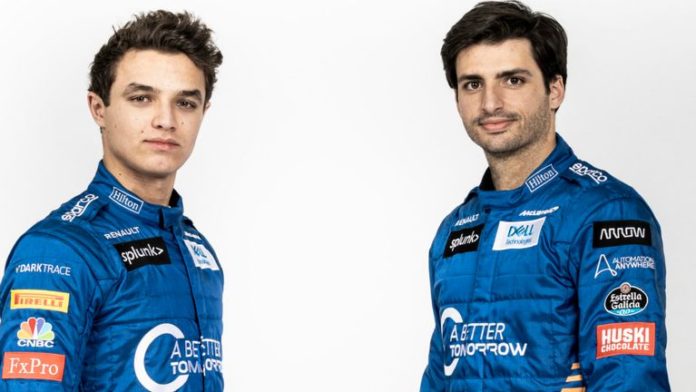 Assessing the key soundbites from McLaren’s launch to F1 2020

After moving from ninth in the championship to fourth in the space of two years, McLaren are very much F1’s team on the up.

And while they readily admit it will take a “massive step” to gain on those ahead in 2020, confidence ran through their famous MTC headquarters as the sport’s most successful British outfit launched another striking new contender – one they expect to build on their momentum from last year.

“We’re just getting started with our trajectory back to the front,” proclaimed McLaren CEO Zak Brown at Thursday’s unveiling of the MCL35.

McLaren’s impressive 2019 featured their first podium in five years, heralded the start of an exciting era with new drivers Carlos Sainz and Lando Norris, while it finished with a fourth-placed finish in the standings – and a comfortable points advantage over the midfield rivals they were previously trailing.

The only issue now is, such a strong campaign makes improving on it in 2020 – in terms of positions, at least – extremely difficult.

“Third place is probably realistically out of reach this year,” Brown told Sky Sports News. “Never say never, and we’re certainly going to try, but the gap is pretty big.”

He added: “I think we have to be realistic – and we hope to close that gap.

“The first thing we need to do is not go backwards, and that in itself isn’t easy as we’ve got great competition in the midfield. I’m very, very pleased but [there’s] still a long way to go.”

That’s not to say McLaren aren’t setting themselves ambitious targets.

“In my opinion we can improve on last year,” said Sainz. “It’s not going to be easy, we’re going to have a very tight and tough competition, but we are on our way up and we’re going to target that.”

Technical director James Key added: “You have to have a target to work to because you have to figure out where you need to be. One of those is to get to the front, but that’s a huge step compared to where we are now.

“To do that in a year would be a very welcome, but massive step.”

The team say the “realistic target” is closing on Mercedes, Red Bull and Ferrari while remaining in fourth amid tough competition.

Their main 2020 rivals may well be Renault, who supply them with their engines and were expected to lead the midfield in 2019 before McLaren’s resurgence.

“I think they’re going to be tough competitors this year – and so will the rest of the field,” stated Brown. “The reality is we need to try and improve upon where we were last year.

“But there is a big gap to third and whilst the points look like we were comfortably in fourth, I can tell you we weren’t comfortable at all during the season.

“Renault has got two great drivers, a tough team [to beat], and teams in sixth, seventh and eighth – everyone kind of took a turn at being the fourth-quickest team at one point last year, so everyone is capable of being there.”

What changes have been made to ‘very different’ new car?

Key is a highly-respected technical director who joined McLaren last year – and so the MCL35 is the first constructed under his guidance.

“We tried to carry forward where we were going last year and then add what we felt opportunities we couldn’t unlock on the MCL34 [last year’s car],” he said.

It features a bold matte look – similar to Red Bull and Ferrari – and is slim and narrow with its design.

Key said the paintjob had “technical and weight benefits”, while also spoke in detail about the new car:

“We have changed a few areas, the bodywork is following a trend I think we’re seeing increasingly, with a very narrow sidepod, which is quite an exercise in packaging.

“You have to plan well early for that sort of thing because it involves a lot of the engine installation and so on.

“We’ve done a similar exercise with the gearbox, to try and match that philosophy.

“On the rear part, there has been a lot of work on the suspension, too. So from the cockpit backwards, it’s a very different approach to what we had before.”

A very different approach, but McLaren will hope for similar results on track.