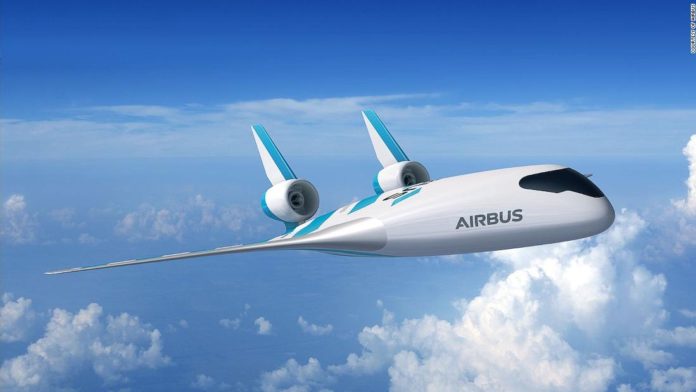 (CNN) — Following a series of secret tests, Airbus has revealed a futuristic “blended wing” commercial aircraft design that promises to cut fuel consumption up to 20%.

The French aircraft maker rolled out a model of the small-scale, remote-controlled aircraft demonstrator it’s been using to test the design at the Singapore Air Show 2020 on Tuesday.

This “blended wing body” demonstrator is called MAVERIC — which stands for Model Aircraft for Validation and Experimentation of Robust Innovative Controls — and is two meters long and 3.2 meters wide.

Testing has reportedly been underway since June 2019 but the project, which launched in 2017, was kept under wraps until this month.

According to Airbus, MAVERIC helps accelerate understanding of new aircraft configurations and matures the technology necessary to fly such a radically different aircraft.

What’s so special about this aerodynamic “blended wing body”? In addition to the environmental benefit — approximately 20% less fuel burn compared to current single-aisle models with the same engine — Airbus says the plane’s unusual and spacious configuration opens up new possibilities for cabin design.

To prove this point, it also released a series of design renderings showing what passengers onboard a blended wing aircraft might be in for. Noise would likely be reduced too, due to the plane’s “shielded” engine, which is mounted above the central body.

“Airbus is leveraging emerging technologies to pioneer the future of flight,” says Jean-Brice Dumont, executive vice president of engineering at Airbus, in a statement announcing the new design.

“By testing disruptive aircraft configurations, Airbus is able to evaluate their potential as viable future products.”

Airbus says its blended-wing planes would open up new possibilities for cabin design.

Airbus admits the design is radical. In fact, it says some engineers didn’t even think it would work, given it’s a complete departure from traditional aircraft architecture.

“Initially, many dismissed the MAVERIC project as merely a ‘hobby,’ or, in other words, a project Airbus wouldn’t learn very much from,” says Adrien Bérard, MAVERIC project co-leader, in a statement. “So we had to prove them wrong by showing that we could deliver a very sound basis for future aircraft configuration.”

But fliers shouldn’t get too excited just yet. Tests will reportedly continue on MAVERIC until mid-2020 but the company says there’s no specific time line for entry into service. That said, Dumont insists it “could be instrumental in bringing about change in commercial aircraft architectures for an environmentally sustainable future for the aviation industry.”

Speaking to media at the Singapore Air Show, he noted advances in flight control technology and weight reduction means now is the time to move the design forward.

Dutch airline KLM announced last year it was helping fund the development of a V-shaped, fuel-efficient airplane design known as the Flying-V, intended to carry more than 300 passengers and offer 20% fuel efficiencies on aircraft of comparable capacity.

3 Ways to Help Save Monarch Butterflies and Other Pollinators

Cancer Is on the Rise Among Young People