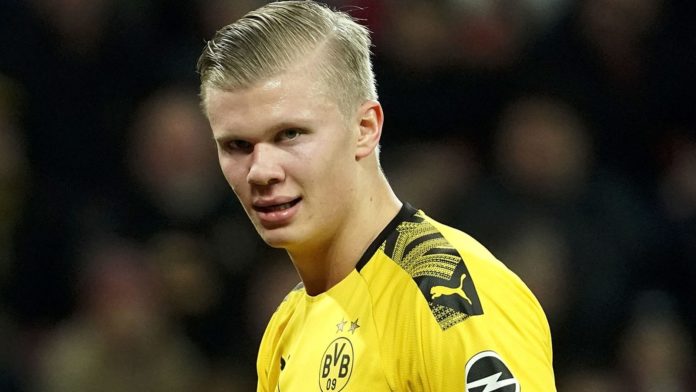 Norwegian striker praises Mino Raiola after criticism of his agent

Erling Haaland insists his decision to move to Borussia Dortmund instead of Manchester United was not because of money.

United were one of 12 clubs – according to Haaland’s agent Mino Raiola – to have been in talks to sign the 19-year-old striker in the January transfer window.

It is understood United met the £17m buy-out clause in Haaland’s RB Salzburg contract but were not keen to meet the conditions of the transfer – in particular the release clause the player’s camp wanted inserted in his new deal.

The Norwegian international instead joined Borussia Dortmund on a four-and-a-half-year deal, but he says his decision to move to Germany was not made through greed.

“No. The guys writing that would have to speak about that,” Haaland told Norwegian television channel Viasport. “They’ll have to explain it to me if they meet me.

“It’s kind of comical for me to be given that label. All the people closest to me know that’s not the kind of person I am. It’s really just funny.

“When the season was over, my father and I started talking. At that point, he didn’t mention Dortmund at all. Then I asked him, ‘What about this club? That would be nice.’ Then he said, ‘We’ll see.’

“It suddenly became an option and I had a good feeling about it throughout. The process was pretty simple on my end. I just played football and wasn’t very involved until the first half of the season was over.

“I didn’t have that much to do with it, to be honest. The process was to find the best possible club for me.”

Haaland’s agent Raiola has, on occasion, attracted criticism for his outspoken nature.

But Haaland has defended the man who helped engineer his move to the Bundesliga, saying: “He’s the best in the world at what he does. It’s as simple as that.

“He’s the best agent. He gets a lot of negativity and that’s probably because people don’t like him since he’s doing such a great job for the ones he’s working for. He has been very helpful and he’s a good guy to have around.”