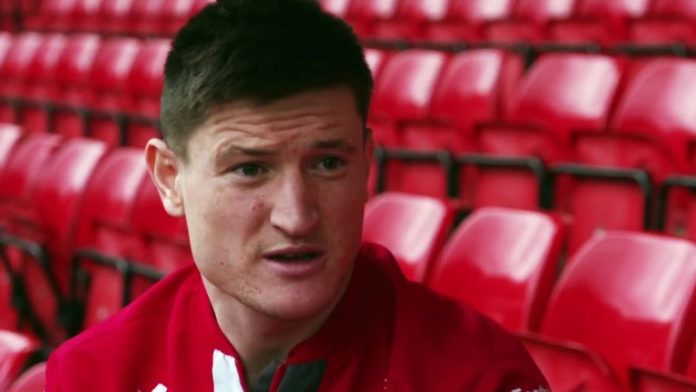 Watch West Brom vs Nottingham Forest live on Sky Sports Football from 12pm on Saturday; kick-off is at 12.30pm

There’s no doubt the headline story in the Sky Bet Championship over the last few months has been the downturn in form of the two sides who have led the way for large parts the season: West Brom and Leeds.

On December 11, the pair were level on points, having seemingly assembled an unassailable 11-point lead between themselves and Scott Parker’s Fulham in third. But, as has been widely documented, that lead was cut significantly in the two months afterwards.

Away from the headlines, several teams have closed in, including Nottingham Forest. Led by former France international Sabri Lamouchi, the club has flitted in and out of the play-off places since September, but a 2-0 win over Leeds at the City Ground last Saturday cemented their candidacy as automatic promotion hopefuls.

One player at the forefront of their promotion quest has been Joe Lolley. The 27-year-old Sports Coaching graduate is excelling in only his seventh season as a professional footballer, with five goals and three assists to his name already in 2020.

But it’s not been a wholly smooth campaign for him.

“I did get a little bit of stick at the beginning,” he explained to Sky Sports’ EFL reporter Jonathan Oakes.

“I think sometimes the expectations are high. It seems like I’m making excuses but, for example, I had a broken toe at the start of the season for a few months and it was difficult. I wasn’t really training much and I lost a lot of sharpness. At that time I wasn’t playing at my best but I knew, once I started getting back into my stride, everything would happen naturally. It’s been nice to get back to the levels I wanted to be at.

“I think I’d been playing well leading up to the New Year and it was a bit frustrating at times because things weren’t going in or leading to goals like you want as an attacking player. But I always kept confidence and knew if I kept playing well, things would fall and it has done, I guess, naturally, without even realising.

“Hopefully that continues because it’s only going to help us climb the table. We’ve got a lot of good players so if we are, defensively, pretty sound, the if likes of me, Grabbs (Lewis Grabban) and Sammy (Ameobi), can score, we’re going to win a lot more games than we’re going to lose.”

When Lamouchi arrived on the banks of the River Trent last summer, questions were raised as to whether he would be able to navigate his way through the notoriously difficult second tier of English football, particularly with no prior experience.

Many doubters have since been silenced in that respect, but as Lolley revealed, a large part of the season’s success to date can be attributed to the man management skills of the former Rennes boss.

He continued: “He was a bit of an unknown quantity for a few of us, but he was a very good player by the sounds of it. Within his first few days we went to Spain and after a week we knew we were on the right path.

“We went into the season pretty confident that we had a very good manager. He’s tactically very good and his man management as well has been brilliant. He’s understood the demands of everything and he’s allowed us to flourish this season and we are where we are because of that.

“We are a very organised team; we do our jobs and we make sure we do them properly. I’ve played as a No 10 and out wide this year and from an attacking point of view, he does give us the freedom, especially to just play how we want.

Check out the latest EFL odds and more from Sky Bet…

Tuesday’s 1-0 defeat to Charlton prevented Forest from leapfrogging Leeds into second place after Marcelo Bielsa’s team dropped points in a 1-1 draw with Brentford, but after Saturday’s clash with leaders West Brom, they have to play just two of the current top six – Fulham at home on Good Friday and Preston away on Easter Monday.

Lamouchi himself has dubbed the division ‘crazy’, but though winger Lolley is not getting ahead of himself, he argued that chances of reaching the Premier League will come down to consistency alone.

He added: “It was a frustrating night Tuesday after a massive win Saturday and I guess it has summed up the Championship so far. West Brom have now given themselves a bit of a lead but hopefully on Saturday we can rope them back into mayhem that is behind.

“We are extremely organised, we are tough to break down. Once we get in a system, we do our jobs, are very demanding of each other and we are probably best set up in that way, as the results have shown. We’ve played Brentford twice, played Leeds twice and in those four games, we’ve conceded one goal and, to be honest, not many chances with that.

“It’s just crazy when you look at the league, three points between second and seventh now. Every team in that bracket will be thinking: ‘Why not us? Why can’t we be promoted?’ and probably even teams below that will be looking at the amount of points that have been dropped and thinking if they put runs together – three, four, five wins – that they’re going to be right up there as well.

“We can’t get too ahead of ourselves but we also know that if we lose Saturday, it’s not the end of the world; it’s not like we’re going to be out of contention. There’s a lot of twists and turns to come and it’s whoever keeps consistent, I think, it’s going to get into the top two.”

Having spent half of the 2017/18 Premier League with Huddersfield, is Lolley dreaming of a top-flight return?

He said: “I completed it – I scored a goal! I had a small taste of it; I wasn’t really enjoying my football too much at the time so it wasn’t such a big thing to leave, but it feels right now that it would be great to take this club there.

“It’s a massive club, ready, primed for the Premier League in terms of its facilities, fanbase, the history of the club and everything about it. If we can make it happen that would be brilliant and then personally for me it does feel like it’s the right time, I’m the right age that it would be nice to have a second go.”