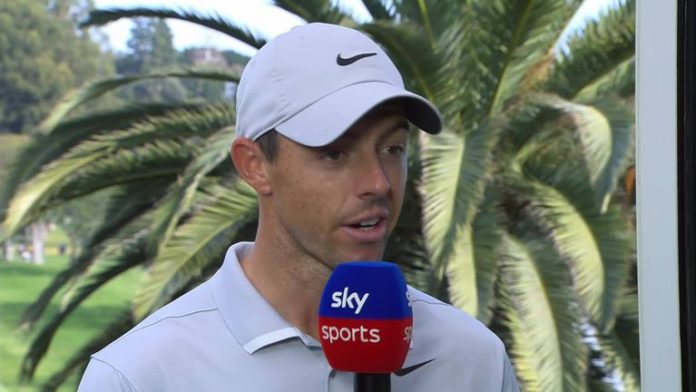 Rory McIlroy is planning to avoid thinking about the congested leaderboard around him when he takes a share of the lead into the final round of the Genesis Invitational.

The world No 1 posted a three-under 68 at Riviera Country Club to join Australia’s Adam Scott and overnight leader Matt Kuchar in a three-way tie at the top on 10 under.

McIlroy is already a winner on the PGA Tour this season after claiming the WGC-HSBC Champions in Shanghai in October, although had to settle for a share of third at the Farmers Insurance Open in his last start.

The Northern Irishman will go out in the last group again on Sunday, just like he did at Torrey Pines, with the top 16 players separated by just four strokes heading into the final day.

“I think you just have to worry about yourself, concentrate on what you’re doing, do it well, set yourself a target, don’t think about anyone else,” McIlroy said. “If that’s good enough at the end of the day, then great.

“If not, then someone just played better than you and hats off to them, you fly to Mexico [WGC-Mexico Championship] and tee it up again next week and you try again.

“I hit it well all day, especially at the start of the round, but I felt like every time I hit a decent shot I left myself on the wrong side of the hole. Just kept telling myself to stay patient and I felt like my patience was rewarded with the two birdies on the eighth and the ninth hole.”

Tournament host Tiger Woods slipped out of contention after posting five bogeys and a four-putt double-bogey on his way to a five-over 76, leaving him 15 strokes adrift in a share of 63rd.

“I didn’t putt well today at all,” Woods admitted. “I didn’t have a feel for it, I didn’t see my lines, I couldn’t feel my pace and I was just off.

“A new day tomorrow. That’s the way golf is, put it in the past and try to learn from what I did right and wrong. Obviously there wasn’t a whole lot I did right today.”