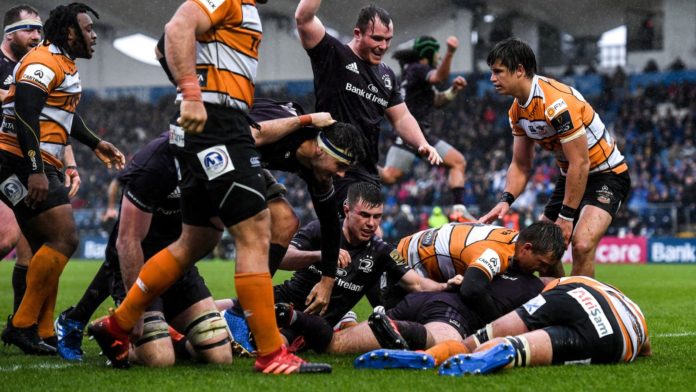 We round up all of the action from Saturday’s PRO14 games, including Leinster extending their unbeaten record and Ospreys celebrating a rare win…

Conference A leaders Leinster continued their unbeaten season with a 36-12 bonus-point win over Cheetahs at a rain-lashed RDS.

Newly-capped Ireland hooker Ronan Kelleher closed out the first half with his seventh try of the Guinness PRO14 campaign, adding to Will Connors and Michael Bent’s earlier scores, as Leinster made light of the wind and rain to lead 22-0.

“To get five tries in those conditions is very, very pleasing.” ?

The Irish province had 82 per cent of possession by the break and continued to dominate, setting up further tries for Rhys Ruddock and man of the match Connors.

Replacement forwards Luan De Bruin and Aidon Davis both crossed for Cheetahs during the final 18 minutes.

Edinburgh went back to the top of Guinness PRO14 Conference B after putting in a strong defensive effort to stop Scarlets in a hard-fought 14-9 win in Llanelli.

Wing Duhan van der Merwe scored a try and created a second for centre Mike Scott despite Edinburgh having to defend in their 22 for large periods of the game.

The win was Edinburgh’s fifth consecutive victory over the Scarlets.

Hooker Scott Otten crossed for two tries as Ospreys celebrated only their second PRO14 victory of the season as they edged out Ulster 26-24 at a rain-swept Liberty Stadium.

Ulster, who had come back from 23-10 down early in the second half, had a chance to win the match at the death, but Bill Johnson’s 83rd-minute drop-goal attempt was charged down by Aled Davies.

Thank you for all your support ?

Ireland hooker Dave Heffernan delivered a man-of-the-match performance as Connacht ran out 29-0 bonus-point winners over Cardiff Blues at the Sportsground.

Carty, who failed to make Ireland’s Six Nations squad, had a hand in John Porch’s 49th-minute score before Kyle Godwin bagged a breakaway bonus-point effort as the hosts ended their five-match losing run in all competitions.

Despite Nick Williams’ solid impact off the bench and Denis Buckley being sin-binned, Cardiff continued to make errors and they now trail fourth-placed Connacht by six points in the Conference B table.