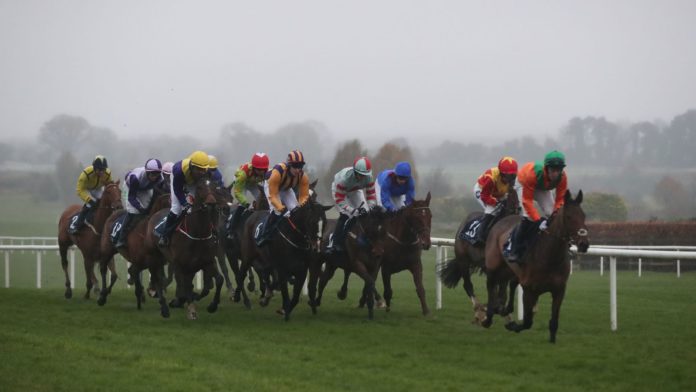 Captain Cj was rewarded for his fine effort when second to the highly-regarded Minella Indo at Navan as he opened his account over fences in the Ten Up Novice Chase at Navan.

The nine-year-old’s stamina shone through to lead before the last in the hands of Conor Maxwell and beat Elwood by six lengths for trainer Dermot McLoughlin.

“Conor said he got stuck in the ground a bit jumping, but was able to make it up easy on the flat,” said McLoughlin of his 100-30 winner.

“His form was there. He is in the Eider Chase (at Newcastle), but won’t run. It was a choice of coming here or the Eider and I’d like to run him in the Irish National now.

“He is ground dependent and if it was too quick I wouldn’t run him.”

The 14-year-old Seskinane belied his age to take the navanadventurecentre.ie Handicap Hurdle by four and three-quarter lengths under Phillip Enright.

“That ground, this track and trip is key to him and he has done it well in the end. There is a 0-116 here in two weeks’ time and that’s where he’ll go,” said McMahon.

Eoin Mahon was in the saddle as Se Mo Laoch (9-1) led on the run-in to beat long-time leader Wishmoor by four lengths in the Come Racing 29th February Handicap Chase.

“I was hoping he might win and go up a few pounds to get into the Kim Muir at Cheltenham and Eoin can ride him,” said McMahon.

“Eoin is a massive team member, is in every day and is a slave to work. He won the five-year-old maiden at Nenagh (point-to-point) earlier and shot up the road to be here on time to ride Se Mo Laoch.”

He added: “This is like interviewing Gordon (Elliott) – normally if I had two or three winners in the year that would be about the height of it, and to have two in a day is beyond belief.”

Francin (4-7 favourite) overcame a mistake at the last to land the odds for trainer Willie Mullins in the 2020 Get Your Navan Membership Maiden Hurdle.

Leading two out, he had to be ridden out by Paul Townend to hold Elliott’s The Very Man by three and a half lengths.

“His race at Christmas has worked out well and now he is another winner out of it,” said Mullins.

“It is hard to look impressive there – I thought he was going to be impressive, but he seemed to get stuck in the ground.

“I’ll find a nice race in the spring somewhere and he can go up to two and a half miles on nicer ground.”

Sassy Yet Classy (8-1) gave Elliott a double on the card when taking advantage of Regina Dracones’ fall two out in the Kevin Brady Car Sales Mares Handicap Hurdle.

The 8-1 shot stayed on to beat Bay Ambition by two and three-quarter lengths under Davy Russell.

“In fairness to her, she won her bumper on soft ground at Listowel a couple of years ago but she has never really had the ground she wanted,” said the County Meath handler.

“Davy said he went wider than he wanted the whole way, but he wanted to keep her in a rhythm and she probably wants further.”

Elliott’s Ballyadam was sent off 1-4 favourite for the Flower Hill (Pro/Am) INH Flat Race, but could only finish third behind the Mags Mullins-trained Julies Stowaway (5-1).