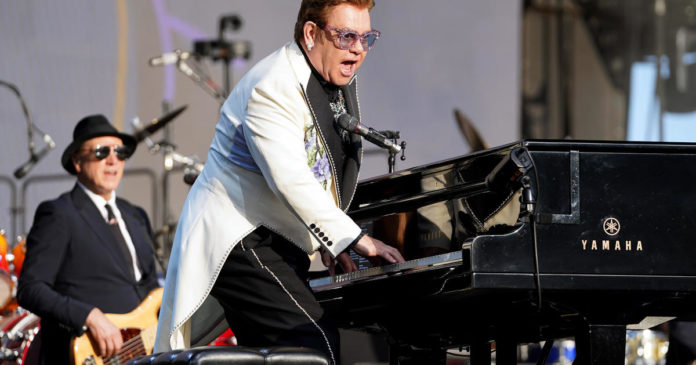 Elton John on Sunday was forced to end a concert in Auckland, New Zealand, early after losing his voice due to a case of walking pneumonia. The 72-year-old singer had to be helped off stage.

“I want to thank everyone who attended tonight’s gig in Auckland. I was diagnosed with walking pneumonia earlier today, but I was determined to give you the best show humanly possible,” John said in an Instagram post following the shortened performance. “I played and sang my heart out, until my voice could sing no more. I’m disappointed, deeply upset and sorry. I gave it all I had. Thank-you so much for your extraordinary support and all the love you showed me during tonight’s performance. I am eternally grateful. Love, Elton xx .”

John ended the show after playing 15 of the planned 25 songs on the concert setlist. He attempted to sing “Daniel,” but had no voice left and had to stop. Social media videos posted by concertgoers show John hoarsely apologizing to the crowd before getting up from his piano and making apologetic gestures to the audience. The crowd responded with an extended ovation as the singer was helped offstage by two crewmembers.

According to the New Zealand Herald, John informed the crowd early in the show that he had been diagnosed with walking pneumonia that morning, but didn’t want to cancel the show. After performing “Someone Saved My Life Tonight,” the concert came to a brief halt as John required medical attention.

A bit later, he informed the crowd, “I don’t know how much longer I can sing. I’ll try, but I’ve got nothing left,” but still managed to get through “Candle in the Wind,” according to the Herald’s Tim McCready.

John is scheduled to play two more shows at Mount Smart Stadium in Auckland on Tuesday and Thursday and the promoters announced Monday that both shows will go on as planned.

“Elton John was disappointed and deeply upset at having to end his Auckland concert early last night,” a statement from Chugg Entertainment read. “At this stage, all remaining shows will go ahead as planned.”

The singer is currently in the midst of his three-year-long Farewell Yellow Brick Road tour, which began in September 2018. John announced earlier that he will retire from touring at the conclusion of the tour.

DDG Shows Off His Curated Collection of Seriously Luxe Watches and...