Home Sport ‘Fury showed heart but I hurt him!’ 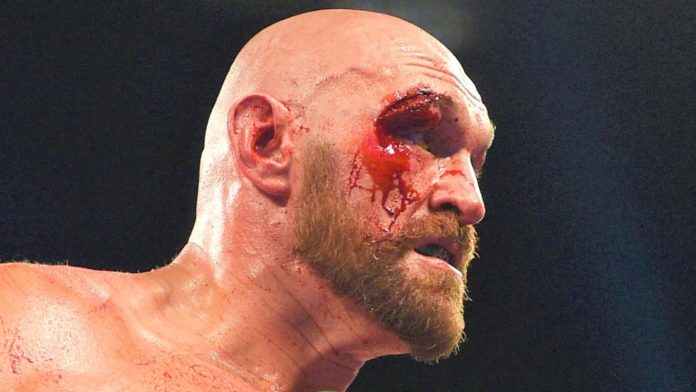 “Yes, I felt like I hurt him different times. If I would’ve had more left in the tank I could’ve stopped him.”

Tyson Fury was badly cut and soaked in blood after his battle with Otto Wallin, who says he was only a few punches away from ruining the Deontay Wilder rematch.

Fury had intended to sharpen his skills against the Swedish heavyweight before his second fight with Wilder, but Britain’s former world champion survived a major scare to claim a points win in Las Vegas last September.

With Wilder-Fury 2 just a few days away, Wallin looks back at the brutal brawl and raises a few concerns about his former opponent…

What were your early thoughts in the Fury fight?

I remember thinking when the first bell rang that now it’s time. I’m in the ring with Fury and now I’m going to bring my all.

I wasn’t surprised by his tactics. I’ve been watching him for years and we had a good gameplan.

For example, as you can see in the fight, my team had talked to the referee about not letting Fury grab the rope and punch like he usually does, and he wasn’t allowed to that in this fight. We knew what we were dealing with.

Can you tell us about Fury’s strengths?

I believe what separated us in this fight was his experience and how he used that to his advantage.

He has a good jab that he can throw in a lot of different ways and he uses that with his size well. One of his other strengths is that he’s got a big heart, which he showed in the Wilder fight and also our fight when he was cut.

How did you cope with his unorthodox style?

Yes, he’s awkward, but there’s ways to take that away and one way is to not show him too much respect and make it a fight.

Did you expose weaknesses in Fury?

I think I showed that he has flaws as everybody else. You need the right tools to take advantage of them and you can’t fight Fury as any other fighter you fought before.

Do you think he coped well with the cuts?

Yes, I think he did. He got the win and he didn’t want to quit, which he deserves respect for.

Could you have forced a stoppage?

Yes, I felt like I hurt him different times. If I would’ve had more left in the tank I could’ve stopped him.

We’ve been analysing the fight and we’ve picked up a lot that I need to work on, and hopefully that’s going to show in my upcoming fights.

Were you surprised by Fury’s split with trainer Ben Davison?

Yes and no. I know that John Fury was upset with Ben’s job in there and I’m sure that affects Tyson’s outlook on the whole thing. I have no idea what was going on in their camp and I can’t tell if that was a good move or not.

Will Fury be punished for a similar performance against Wilder?

I don’t think Fury made any new mistakes that he hasn’t done before. I think his problem was me – I’m a good fighter and we had a good game plan going into the fight, and that gave him problems.

Can you predict who will win Wilder-Fury 2?

It’s very hard to analyse, especially when you have a big puncher like Wilder in there.

I do think, though, that Fury has more tools to work with and that he’ll be able to adapt better for a rematch. I know if Wilder opens up that cut and wins the fight he needs to give me a cut of his purse!

Do you want another fight with Fury?

Of course I want the Fury rematch.

You’ve got to remember that before I fought Fury I had only fought one round in 18 months. If I would’ve had a couple of fights under my belt the fight might have been much better for me.

Could you challenge for a world title in the future?

I definitely hope so. I want to be heavyweight champion of the world and that’s why I’m working so hard every day