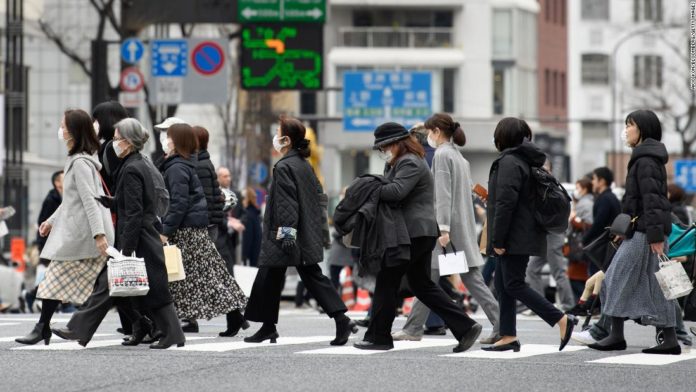 The world’s third-largest economy shrank 1.6% in the fourth quarter of 2019, according to a government estimate released Monday. The decline from the third quarter is the biggest contraction since 2014.
The drop was even more severe — a 6.3% plunge — when measured as an annualized rate.
The fact that growth slowed in the three months to December wasn’t a surprise. Analysts had been expecting as much as the country absorbed a sales tax hike and grappled with the aftermath of Typhoon Hagibis, a powerful storm that hit the country last fall.
But Monday’s data was worse than the 0.9% quarter-on-quarter drop that analysts polled by Reuters predicted. And the spread of the coronavirus now threatens to stamp out hopes for a recovery in the first quarter.
“A recession now looks all but inevitable,” said Robert Carnell, chief economist and head of research for Asia Pacific at ING.
Japan had made efforts before the outbreak to shore up its economy. Analysts at Oxford Economics pointed out that a massive $120 billion stimulus package announced by the government in December should help put a floor under growth. But they added that the outbreak risks delaying the recovery.
The virus has infected more than 71,000 people worldwide, mostly in mainland China where it originated. Japan has more than 400 confirmed cases, the majority of which have been recorded on board a cruise ship docked off the Japanese port city of Yokohama.
The spread of the disease is of worldwide concern because of how important China has become to the global economy. When the SARS epidemic broke out in 2004, China comprised roughly 4% of world GDP. Now it makes up 16% of global output, and is the backbone of global manufacturing supply chains. It’s also home to hundreds of millions of wealthy consumers who spend a lot of money on luxury products, tourism and cars.
The dent to tourism is a major problem for Japan, which welcomed 8.1 million Chinese tourists last year, according to the Japan National Tourism Organization. More people visited from China than any other country.
Analysts at Daiwa expect hotels, restaurants and retailers to lose revenue if spending by Chinese guests dries up.
Carnell, of ING, wrote Monday that the coronavirus will likely weigh on consumer spending this quarter, contributing to the likelihood that Japan’s economy enters recession. ING forecasts GDP to decline 1.1% for all of 2020.
The disease’s impact on industrial output also remains a question.
Major automakers, for example, were forced to close plants in China to comply with a government lockdown and are only recently restarting some production. Toyota (TM) said on Saturday that it planned this week to restart shifts at some Chinese plants, though they would not yet return to full capacity. And Nissan (NSANF) told CNN Business on Monday that it would have to make “temporary production adjustments” at some plants in Japan because of supply shortages of parts from China.
The disruption to Japanese auto supply chains seems small right now, analysts at Capital Economics wrote Friday. But they noted that other manufacturing sectors in Japan are more reliant on China for parts.
The Japanese GDP figures published Monday kicked off a slew of troubling economic data releases in Asia, stoking even more fears about how much the coronavirus could weigh on the global economy.
Thailand announced that economic growth slowed last quarter, a problem that Capital Economics said would be compounded by a collapse in tourism and disruption to factory output brought on by the coronavirus outbreak. And Singapore’s Ministry of Trade and Industry downgraded its economic outlook for the year because of fears about the spread of the virus.
— Sherisse Pham contributed to this report.