Home World ‘This was too violent’: Protesters march after young woman brutally killed and... 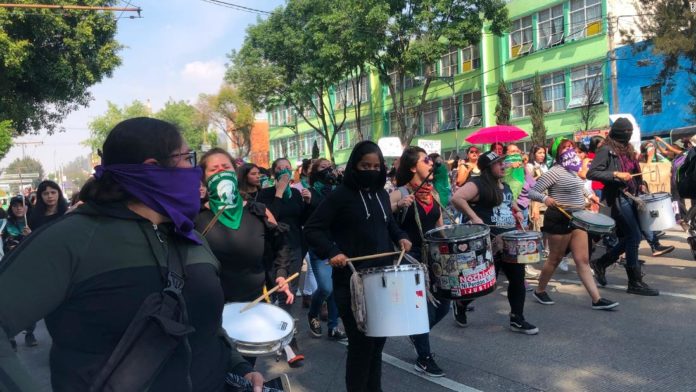 Uproar and anger sparked throughout Mexico after local media outlets published a leaked photograph of Escamilla’s mutilated body on their front pages. A 46-year-old man, believed to be her husband, was arrested at the scene covered in blood.
The frustration surrounding violence against women has morphed into fear in this community in the northern Mexico City neighborhood of Vallejo, where Escamilla lived.
Locals tell CNN things are not as they once were.
“I was born and raised here and now the violence is more than ever,” Armando, 59, told CNN asking to go only by his first name. “This was too violent, and the community is afraid.”
The march consisting of mainly women, began at the Metrobus station of Gustavo A. Madero and ended at the building where Escamilla was killed last week. A group of all female police officers escorted the demonstration.
Residents peeked out of their homes when the march passed through, some filming while others held each other close, nodding in agreement to the chants and movement.
“They took them alive!” one woman shouted. “We want them alive!” the rest chanted.
Purple posters and tissue paper were placed outside of homes throughout the street near the building where Escamilla was killed in remembrance of yet another victim of femicide — the killing of women because of their gender. The number of femicides in Mexico has climbed in recent years.
In 2019, there were 1,006 cases reported, compared with 912 the year before, though some argue those numbers are higher. According to Mexico’s Attorney General Alejandro Gertz, femicides have increased 137% in the last five years.
Nelly Montealegre Díaz, Mexico’s prosecutor against gender violence said last week that in cases of “violence against women, we will investigate them thoroughly and be relentless in our actions.”
Mexico City’s Attorney General’s office is also investigating who leaked the photo of Escamilla’s body to the press.
Mexico City’s mayor Claudia Sheinbaum posted on her Twitter account that prosecutors will demand the maximum sentence against the alleged perpetrator.
“Femicide is an absolute condemnable crime,” Sheinbaum wrote on Twitter. “It is appalling when hatred reaches extremes like in the case of Ingrid Escamilla.”
Indignation and fear had some families watching with worried eyes as the march passed through.
“Nothing feels safe,” Nitzi Gonzalez, 28, tells CNN. “We have daughters. If he goes free, what happens?” she said, fearing that impunity which is rampant in a country with over 35,000 homicides reported last year, will set the alleged killer of Escamilla free.
Gonzalez and her family held up a purple piece of tissue paper, her mother holding back tears as her husband wrapped his arm around her in comfort.
Daniela, 33, chanted and covered her face with a green bandana. “I am here to support because I too have lived through abuse,” she said. “The laws just don’t work.”
Felicitas Roque, 57, tells CNN she has two daughters ages 20 and 22. She’s a local of this community and says the situation is worrisome especially with her daughters living on their own.
But while she demands the government be more vigilant, she says it’s the people and community that have to educate the children and teach men to respect women.
A vigil with flowers and candles sits in front of the building where Escamilla’s lifeless body was found, a picture of her hangs on its wall. Several residents tell CNN the building was fairly new and while most locals know each other on this street, they didn’t know Escamilla or her partner.
Luz Maria Mojica Hernandez, 53, stands next to her younger sister Maria Concepcion, 51. Luz Maria’s only daughter Jesica Celena, 28, was killed in March 2018.
“I feel the same pain for Ingrid [Escamilla] that I felt when my daughter died,” she tells CNN, tears in her eyes.
“Do your job AMLO,” her sister Maria Concepcion says of Mexican President Andrés Manuel López Obrador. “Our women are being murdered daily.”
Emotions ranged from anger to sadness, with women sharing their experiences openly with the crowd. Fists raised in the air were for strength and solidarity. A moment of silence.
“Ingrid is not dead!” one woman shouts. “We are all Ingrid,” the women reply in unison.