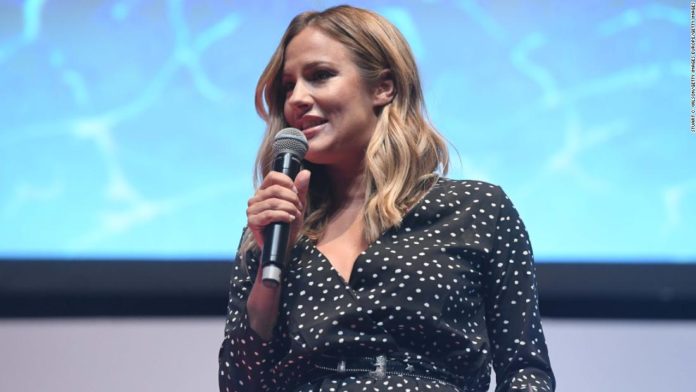 Flack, 40, died by suicide and her body was found in her east London flat Saturday, a lawyer for the family told PA Media.
“We can confirm that our Caroline passed away today, the 15th of February,” the family’s statement said. “We would ask that the press respect the privacy of the family at this difficult time and we would ask they make no attempt to contact us and/or photograph us.”
Flack hosted the series from its inception in 2015 until last December, when she was charged with assault after an incident at her home. She pleaded not guilty to assaulting her 27-year-old boyfriend, Lewis Burton. She was out on bail awaiting trial scheduled for March.
She was replaced as host a few days after her arrest.
At the time, she said that “Love Island” had been her “world” for the previous five years, adding: “It’s the best show on telly.”
ITV, which puts on the show, called her a “much loved member of the team.
“Everybody at Love Island and ITV is shocked and saddened by this desperately sad news,” ITV2 tweeted. “Our sincere thoughts and condolences are with her family and friends.”
Burton paid tribute to his “voice” on Instagram. Alongside a photo of the couple, he wrote: “My heart is broken we had something so special.
“I am so lost for words I am in so much pain I miss you so much I know you felt safe with me you always said I don’t think about anything else when I am with you and I was not allowed to be there this time I kept asking and asking.”
He added: “I will be your voice baby I promise I will ask all the questions you wanted and I will get all the answers nothing will bring you back but I will try make you proud everyday. I love you with all my heart.”
On Thursday, Flack posted a montage photo to her 2.5 million Instagram followers of her and a dog, using the heart emoji.
Current “Love Island” host Laura Whitmore tweeted her sorrow.
“I’m trying to find the words but I can’t,” she wrote while posting a photo of her and Flack along with a poem popular on social media.
Amber Davies, who was a winner along with Kem Cetinay during a 2017 season, tweeted: “My heart is actually broken.”
Dani Dyer, part of the winning couple in the next season, said she was devastated. “Caroline you was a beautiful person and I’m so lucky to have known you. Love you. RIP you beautiful angel,” she tweeted.
Amber Gill, one of last year’s winners, simply wrote: “I’m heartbroken.”
Maura Higgins, who finished in fourth place in the most recent season, wrote a short tribute on her Instagram. “Such heartbreaking news … an incredibly kind & beautiful woman…RIP angel…thoughts and prayers to all her family,” she said.

“Love Island” is, at its heart, a dating show. But in recent years, it’s exploded in popularity to such an extent that it’s now part of the British cultural calendar for about two months a year, dominating social media and winning converts with each passing episode.
Asking for help

So wide is its reach that it’s been parodied on “Saturday Night Live” and has spawned various international spinoffs, which have achieved varying levels of success.
Flack was involved in other popular shows.
She was a presenter on “I’m a Celebrity, Get Me Out of Here! Now!” and “The Xtra Factor.”
In 2014, she and her partner, Pasha Kovalev, won “Strictly Come Dancing.”
Flack appeared in the British television comedy “Bo’ Selecta!”, which ran from 2002 to 2004.