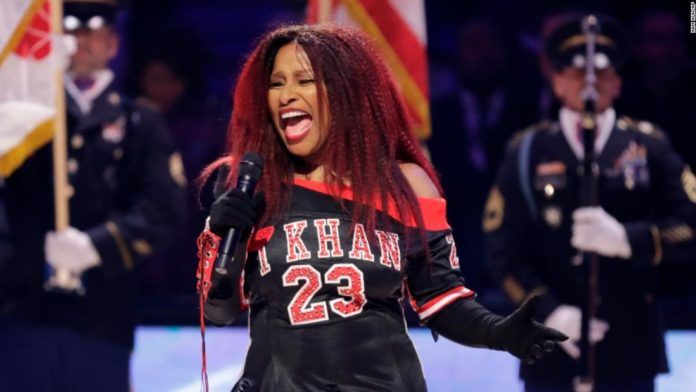 The legendary singer performed the National Anthem Sunday night during the 2020 NBA All-Star game.
Khan was one of several famous Chicago natives selected to perform, given that the game was played in that city.
The Grammy Award-winning singer has scored multiple hits throughout the decades, starting with being a lead singer with the band Rufus, but Sunday night’s performance was not music to some people’s ears.
Wearing what appeared to be a customized Chicago Bulls top sporting Michael Jordan’s retired No. 23, Khan offered up some of the vocal riffs and runs that she’s known for.
But when it comes to “The Star Spangled Banner,” less is sometimes more.
“I adore Chaka Khan,” one person tweeted. “She is a living legend, but I DID NOT like that rendition of the Star Spangled Banner AT ALL. Lord help her.”
Some found the performance reminiscent of singer Fergie’s widely panned rendition during the 2018 All-Star game, which was also dragged on social media.
“I’m a risk taker artistically, but clearly this rendition didn’t strike the intended tone,” Fergie said in a statement at the time. “I love this country and honestly tried my best.”
CNN has reached out to reps for Khan for comment.

Drive-in cinema tackles a wee issue: Its customers are in England, but the toilets are in Wales

‘I don’t even know if I can act anymore’: Backstage With… Pixie star Olivia Cooke